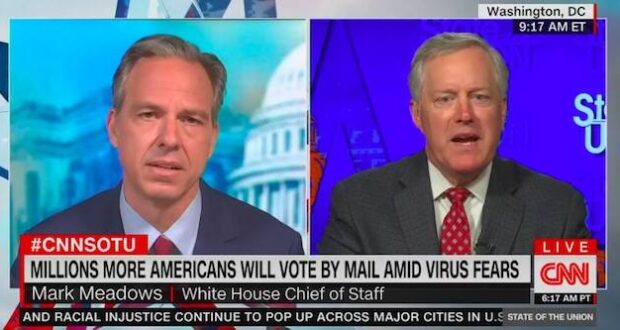 As Democrats and news outlets push the conspiracy theory that the US Post Office is tampering with the election, the White House is hitting back with a little history.

White House chief of staff Mark Meadows was met with virtual silence from CNN’s Jake Tapper as he said reports about the machines being taken out of service are “not based on fact” and are a “narrative.” Meadows was responding to Tapper’s assertion, fueled by Democrats in the media this week, that U.S. Postal Service (USPS) letter-sorting machines were purposely being decommissioned at the behest of the Trump campaign.

“There’s no sorting machines that are going offline between now and the election,” Meadows shot back. “That’s something that my Democrat friends are trying to do to stoke fear out there. That’s not happening.”

Meadows went down a time-line of how the Postal Service is funded and reminded Tapper that ordinary reallocation of mail collection boxes from areas that handle little mail to busier areas was something that was approved a decade ago “under the Obama administration” and the previous Democrat-appointed Post Master. The process is even explained on the website of the US Postal Service.

Sorting machines that are not part of an “already scheduled reallocation” will remain, and decommissioning machines is not a new move by the postmaster general, he continued.

At the same time, the chief of staff said that Democrats should come back to Washington and negotiate USPS funding along with stimulus package measures including unemployment benefits, stimulus payments, and small business loans.

The dispute over funding the USPS has been punctuated by allegations from President Donald Trump and other Republicans about potential mail-in voting fraud. National news media says that voter fraud is rare but a quick YouTube search for voter fraud finds dozens of local news stations reporting on mass voter fraud and problems in their communities, from New Jersey to Nevada. Critics of mail-in voting problems say just because the national media is ignoring what their local news affiliates are reporting on the ground doesn’t mean there’s not a widespread problem.

If you can protest in person you can vote in person

There’s growing concern across the country about problems associated with mail-in voting and, more problematic to many, a push by Democrat mayors, governors and Congressional leaders who say coronavirus makes it too dangerous to vote. Popular memes and Facebook posts point out the large crowds void of social distancing that attended the funeral of Congressman John Lewis and George Floyd or protested over the last three months with the support of Democrat leaders. If people can attend those events then Americans should be able to vote in person critics of mail-in voting contend.

But with all that, Meadows reminded the CNN host that it is not the President that controls the purse strings for the Post Office. Trump has said he is waiting on Congress to provide a funding bill. Negotiations on the stimulus talks stalled after Democrats sought to push a more than $3.4 trillion COVID-19 package. Republicans earlier unveiled a $1 trillion deal. The Democrat spending package includes almost $1 trillion for Democrat-controlled cities and states rocked by protests and looting. Republicans are opposed to the idea, with Trump saying it would be a “bailout” of “poorly run” municipalities.

“They want $1 trillion to go to their friends doing a bad job running certain cities and states,” Trump alleged in the news conference, referring to the plan.

Late last week, Trump told reporters that he is willing to sign off on $25 billion in USPS funding if Democrats make concessions on the broader stimulus package.

Democrats continue to promote a false narrative that the White House is not funding the Post Office. House Speaker Nancy Pelosi (D-Calif.) continued that narrative last week and it was picked up and repeated by CNN, CBS and the other national news outlets.

“House and Senate Democrats call on the President to immediately cease his assault on the Postal Service, make clear that he will allow the 2020 election to proceed without his sabotage tactics and enable the American people the same opportunity he and the First Lady requested this week to vote by absentee ballot,” she and Senate Minority Leader Charles Schumer (D-N.Y.) said in a joint statement on Friday.

Send me the funding bill, President Trump responded. So far, Democrats seem unwilling to do that.

Previous: Mom of 5-year-old Cannon seeks the death penalty for neighbor who shot him in the face
Next: Attendees of southwest Missouri revival under Covid-19 quarantine