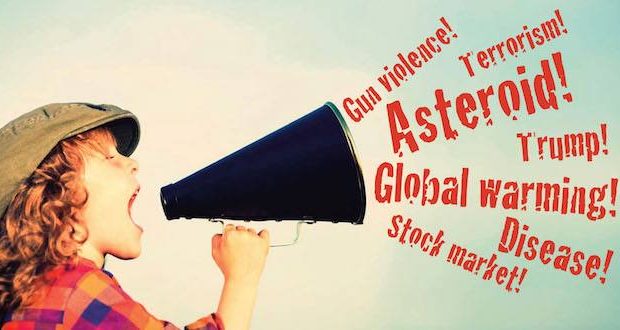 Doomsday preppers are famous for stockpiling food, medicine and other supplies in case of an apocalyptic scenario. The practice has long been painted by the media as a peculiar behavior only exhibited by conspiracy theorists and those labeled right-wing “extremists.”  However, such preparation has actually been steadily rising in the U.S. over the past 15  years among folks from both sides of the political aisle. So, what’s causing this surge in stockpiled rice packets, toilet paper and bottled water?

One group of researchers say it is an ever growing sense of impending doom in American culture.

Many have speculated that this surge in doomsday preparation over the last two decades was linked to an extreme political reaction among many voters to Barack Obama’s political policies after his election in 2008. But much of that seems to be bunk.

A new study out of the United Kingdom finds that neither the Obama presidency nor right-wing conspiracy theories are the cause of this growing phenomenon. Today even those on the left are “prepping” and now there’s proof of  who’s the cause.

Researchers interviewed preppers from 18 states and asked about their motivations for stockpiling food and supplies. The results indicated that, although many did seem to be conservative and fear liberal anarchists such as Antifa, the main reason behind their motivations was the overall sense of fear currently dominating U.S. culture and promoted by most American media outlets to get more viewers.

Peppers and the nightly news

Most Americans can’t seem to turn on the television without being hit by a grim view of the future being reported or speculated on. From CNN to Fox News, MSNBC to the local newspaper, reports of calamity befalling humanity are popular headlines. Every hurricane is the “biggest ever” as well as winter storms which are now given names like “blizzard bomb.” And the latest is a push about global warming with islands on the verse of sinking. Have you noticed that “climate change” is now being inserted into just about every news story?

VIDEO: The Media, Trump and Doomsday

That’s also true with Hollywood which regularly releases at least a half-dozen “end of the world” films each year. It doesn’t help when a major Hollywood studio actually makes a movie about hunting down and killing the 62 million voters who supported Trump in the 2016 election.

Potential occurrences commonly worried about by preppers of all political stripes include possible economic depressions, terrorist attacks, cyber-attacks, pandemics like Ebola, or environmental disasters. And while there’s good reason to fear groups like Antifa if you live in Portland, Ore. whose police have been told to stand down while anarchists rampage through the city center, the fear generated by news headlines is far more effective and reaches more people.

Here’s Hollywood’s end of the world scenes all in one:

Furthermore, researchers say that frequent recommendations from the U.S. government on how to prepare for potential disasters, such as when residents of certain communities are advised to stockpile water in preparation for a hurricane or blackout, have also contributed to the rising number of  people prepping for “doomsday” in the United States.

The study’s authors say their findings paint a more nuanced picture of doomsday preppers and their motivations, especially since up until now most were simply considered crazy or delusional. According to their results, most preppers don’t believe the world will end tomorrow or a giant meteor will hit the earth at any moment, they simply want to be prepared for anything “just in case” something terrible happens.

“Fear is now deeply entrenched in modern American culture and is the principal reason that so many citizens are engaging in ‘prepping’,” explains lead author Dr. Michael Mills in a release.

According to Mills, these preppers believe that if the worse were to happen, the government’s response simply wouldn’t be adequate and many people would be left to fend for themselves.

And while preppers are correct that the government cannot, and should not, be thought of as a fix-all when disaster strikes, history shows it is always the local community that responds first and best in times of crisis. That’s one of the core values of peppers who realize they can offer food and other necessities when the government is slow to act.

“Rather than seeing prepping as an exception within America’s right-wing political culture, we ought to see it as being reflective of increasingly established and popular outlooks,” propagated by mass media Mills comments.

These days, prepping is for everyone.

The study is published in the Journal of American Studies.

Previous: 15th Annual Horror/Sci-Fi Film Festival in Lawrence
Next: Most protestant churchgoers say they think of God each day