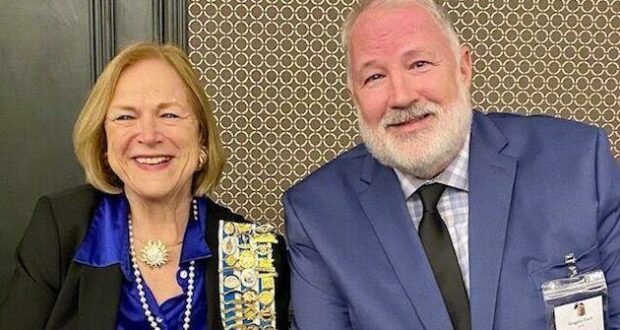 A local Christian school teacher is being honored for making history come alive for his students.

Greg Finch has been named the National Society of the Daughters of the American Revolution Outstanding Teacher of American History of 2022 for all Missouri schools, public and private. He teaches secondary American government, geography, world history and American history at Summit Christian Academ. There were 105 Missouri Chapter winners and, as the state winner, Finch is a finalist for the national prize.

“I didn’t attend college until my early 30s,” Finch says. “I didn’t know what my major would be but presumed it would be business. But it was in college that I was caught off guard when I met a history professor that lit a fire in me.”

Finch went on to earn a bachelor’s degree in English literature and history and a master’s degree in American history from UMKC and in 205 began teaching at the Lee’s Summit school.

Summit Christian Head of School Chris Hahn said Finch is one of the best teachers he has worked with in his career.

“His heart for Jesus, his love for the children he serves and his passion for history contribute to him being a master teacher,” Hahn said. “I have been asked, ‘If you could go back and take a class at Summit Christian, what would it be?’ I would be excited to sign up with Mr. Finch.”

The Daughters of the American Revolution honors teachers demonstrating excellence in readily sharing an incisive knowledge of American history, being committed to their students, and “fostering a spirit of patriotism and loyal support of our country, relating history to modern life and events, and requiring high academic standards at all times from their students.”

“To me personally, the most meaningful era of American history to teach about surrounds the remarkable and revolutionary beginnings of our nation and the selfless visionaries that created our founding documents,” Finch said. “They gifted the Bill of Rights and amazing overall liberties to those of us who have come behind.”

He said students will often come to class with the predetermined idea that history is boring.

“That’s because they’ve had boring history teachers that have focused on dead people and broken things from the past with no context to their real lives today,” Finch said. “To be inspiring, history should be hands-on as much as possible.”