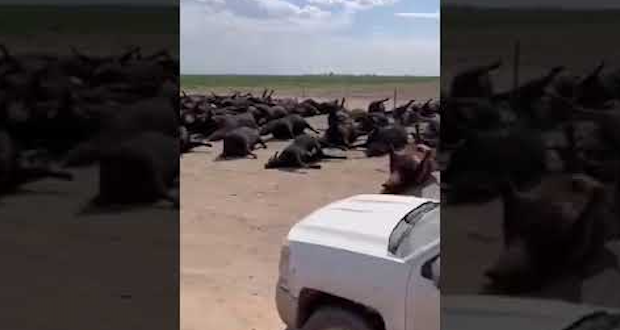 A still from a video showing hundreds of dead cattle which was posted by a Kansas rancher.

Record heat across Missouri and Kansas may contribute to already soaring meat prices. As many as 10,000 cattle already have died in Kansas because of high temperatures. One shocking video posted to YouTube by a Kansas rancher shows hundreds of dead cattle.

The Kansas Department of Health and Environment said at least 2,000 head of cattle succumbed to high heat and humidity as of Tuesday. The calculation is based on the number of carcasses the agency has been asked to help dispose of. “It was essentially a perfect storm,” A.J. Tarpoff, beef extension veterinarian for Kansas State University, told Reuters.

The farming journal AgWeb.com reported the number of dead cattle could be as high as 10,000, and more have been reported dead in Nebraska.

“During these bouts of extreme heat, the cattle can’t dissipate the heat at night because there’s not night cooling and so this perfect storm hits,” Veterinarian Dr. Dan Thomson of Iowa State University told the site. “No different than a tornado hitting a cattle feeding facility or a derecho or whatever, and we have these natural disasters.”

One Kansas rancher near Assaria says the phenomenon of dead cattle is not widespread and may be due to “heat bursts” which he has observed this week.

Livestock on ranches in the western part of the state, which has 2.4 million cattle, suffered heat stress over the weekend as temperatures rose and cooling winds abated, said Scarlett Hagins, spokesperson for the Kansas Livestock Association. Temperatures reached as high as 108 degrees by Monday, Drew Lerner, president of World Weather, told Reuters. Temperatures could go even higher in the coming days, although officials believe wind and lower humidity levels could offer relief to the herds. “It’s going to be oppressively hot and stressful for the animals,” Lerner said.

It was noted that some of the dead cattle had recently come from Montana, and were not used to the heat.

The cattle deaths come as the ranching industry battles droughts and soaring feed costs linked to a global grain squeeze. Russia’s brutal invasion of Ukraine, including the blockade of its ports, is putting tens of millions at risk of starvation across sub-Saharan Africa and Asia.

Kansas is the 3rd largest cattle state, with 6.5 million head, slightly behind #2 Nebraska’s 6.8 million. Texas in #1 with 12.7 million head of cattle