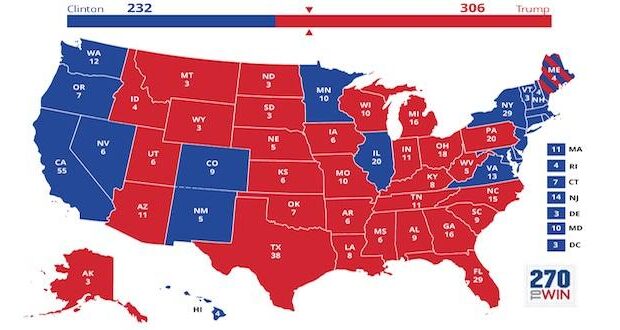 The Supreme Court has unanimously affirmed the constitutionality of “faithless elector” laws that allow states to fine or remove Electoral College members who fail to vote for the presidential candidate they were pledged to support. Some Democrat strategists and even some anti-Trump Republicans had said they would use faithless electors to deny President Donald Trump Electoral College votes during the 2020 presidential election.

While some states have laws that punish such electors for not voting for the candidate to which they pledged support, there have long been legal questions about the enforceability of such laws.

The ruling in two separate appeals came this morning as the next presidential election approaches on Nov. 3.

“Today, we consider whether a State may also penalize an elector for breaking his pledge and voting for someone other than the presidential candidate who won his State’s popular vote,” Justice Elena Kagan wrote for the court in Chiafalo v. Washington.

About 60 years ago states began backing up “their pledge laws with some kind of sanction. By now, 15 States have such a system,” Kagan wrote.

“Almost all of them immediately remove a faithless elector from his position, substituting an alternate whose vote the State reports instead. A few States impose a monetary fine on any elector who flouts his pledge. Washington is one of the 15 States with a sanctions-backed pledge law designed to keep the State’s electors in line with its voting citizens.”

There is “nothing in the Constitution [that] expressly prohibits States from taking away presidential electors’ voting discretion as Washington does. The Constitution is barebones about electors,” Kagan wrote.

States have long used “pledge laws, designed to impress on electors their role as agents of others. A State follows in the same tradition if, like Washington, it chooses to sanction an elector for breaching his promise. Then too, the State instructs its electors that they have no ground for reversing the vote of millions of its citizens. That direction accords with the Constitution—as well as with the trust of a Nation that here, We the People rule.”

Petitioners challenged the law saying the state has no power to enforce how a presidential elector casts his or her ballot, and that penalizing an elector for exercising his or her constitutional discretion to vote violates the First Amendment. The Washington Supreme Court upheld the fines, and the Supreme Court today affirmed that decision in a 9-0 vote.

In the second case, Colorado Department of State v. Baca, Electoral College member Micheal Baca was part of a group called the “Hamilton electors,” who attempted to convince 2016 electors who were pledged to Democrat Hillary Clinton or Republican Donald Trump to come together behind an alternative candidate to prevent a Trump victory.

In the election, Trump won more electoral votes than Clinton, who won more popular votes. When the electors met to vote on Dec. 19, 2016, Baca crossed out Clinton’s name on his ballot and wrote in then-Ohio Gov. John Kasich, a Republican who also ran for president in the 2016 cycle.

The state refused to accept the vote and removed Baca as an elector, replacing him with another elector who voted for Clinton.

Justice Sonia Sotomayor recused herself in the Baca case, which means the justices’ vote to uphold the state’s action was 8-0. Instead of explaining the reasoning behind the decision, the Supreme Court opinion in that case simply stated, “The judgment of the United States Court of Appeals for the Tenth Circuit is reversed for the reasons stated in” the Chiafalo ruling.