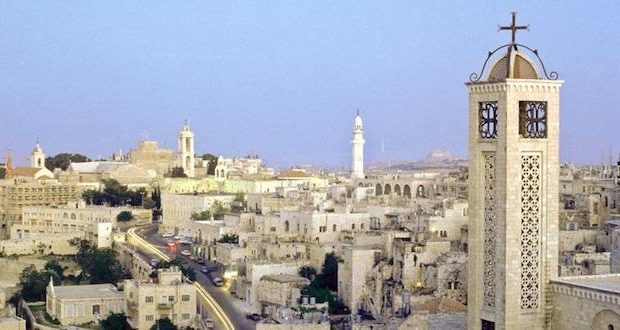 The problem with Bethlehem: Christians disappearing under Palestinian rule

A United Nations Special Envoy to the World Council of Independent Christian Churches is defending Christians currently living under Palestinian control in the West Bank.

Laurie Cardoza-Moore has called upon Christians to confront misinformation about the situation in Bethlehem that is being spread by U.S. Congresswomen Ilhan Omar and Rashida Tlaib. The two women have increasingly spread a false narrative that ignores the persecution of Christians in Bethlehem by the city’s Islamic Palestinian government.

The World Council of Independent Christian Churches represents a whopping 44 million congregants around the world with numerous churches in Palestinian-controlled areas of Judea and Samaria (the West Bank). The organization is attempting to share a fact-based assessment on the status of Christians under Palestinian control.

Churches of all denominations are under attack by Palestinian muslims in Bethlehem. Many Arab Christians have fled to Israel seeking safety and freedom for their families.

During the night of May 13, 2019, vandals broke into a church of the Maronite community in the center of Bethlehem, desecrated it, and stole expensive equipment belonging to the church, including the security cameras.

According to its Facebook page, this is the sixth time the Maronite church in Bethlehem has been subjected to acts of vandalism and theft, including an arson attack in 2015 that caused considerable damage and forced the church to close for a lengthy period.

Mahmoud Abbas, the Palestinian President who has called for the slaughter of Jews in Israel, was present at the December 24, 2018 party to mark the church’s reopening after it was rebuilt following the arson ad destruction caused by rioting of Muslim gangs over the years. The event received no coverage in the Palestinian media. In fact, a full gag order was imposed in many cases while photos of Abbas appeared in the Western media as a supporter of Christians.

A recent tweet from Omar revealed that the congresswomen had planned to visit Bethlehem with the notorious “Christ at the Checkpoint” organization, an anti-Semitic Palestinian group that said Jesus was a Palestinian. The group has also covered-up the mass exodus of the city’s “legitimate” Christian population since it came under Palestinian Authority Control. Cardoza-Moore highlighted the dire situation in Bethlehem for Christians and exposed Christ at the Checkpoint in her recent award-winning documentary: Boycott THIS!

“The majority of Christians left Bethlehem since the Israeli government agreed under the Oslo Accords in 1993 to allow the Palestinian Authority to govern the affairs of the city.  A day that would forever change the living conditions for Christians in Bethlehem,”  states Cardoza-Moore. “Omar and Tlaib were planning to visit the birthplace of Jesus Christ with a subversive anti-Semitic organization that seeks to cover-up the daily persecution of the true followers of Christ at the hands of the Palestinian Authority.

Contrary to the disinformation and propaganda of “Christ at the Checkpoint”, the situation for Christians in Bethlehem has greatly worsened under Palestinian control. We have documented how Christians have been shot at and their churches burnt down for the alleged crime of trying to worship in their holy city.  The reality remains, that Israel is the only place in the Middle East where Christians are free to worship and their rights are protected. Christians once made-up 20% of the city’s population, and are now barely 2%, but Omar and Tlaib would rather do the bidding of anti-Christian Islamists than demonstrate true Judeo/Christian values.”

She continued:  “Not only does Christ at the Checkpoint diminish the message of Christianity, which is deeply rooted in the Hebrew Bible. They have rewritten the Biblical narrative and have quoted texts of scripture out of context in pursuit of furthering their anti-Semitic narrative, suggesting that Jesus, an observant Jew from Judea was actually a Palestinian. All Christians should be appalled at the blanket silence on these women’s Jew hatred from so many American representatives in congress and the media. We will not allow a loud minority of Islamists to drown out the voices of our silenced brothers and sisters in Bethlehem who desperately need our help.”

Though the Christians in the PA avoid saying so publicly, many of them fear – with good reason – that Muslim aggression against them will only escalate. Such fears are all the stronger in light of the thunderous silence of the Western (and Israeli) media in the face of the Christian minority’s ongoing disappearance from the PA and Islamic lands in general – in striking contrast to the growth, prosperity, and increasing integration of the Christian community in Israel proper.

It also doesn’t help that there are willing accomplices in America’s Christian community.

Christ at the Checkpoint is active on many Christian college campuses and is regularly invited into churches unfamiliar with their radicalism and anti-Semitism.