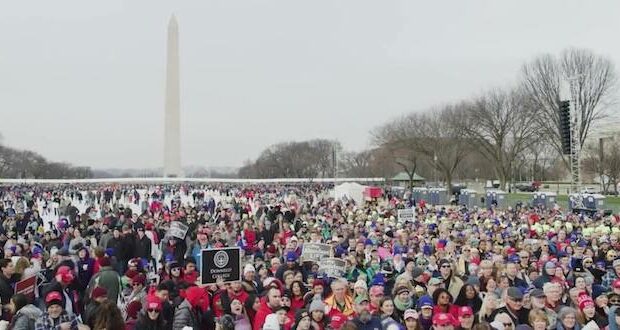 The annual March for Life makes a powerful statement each year, but Kathryn Jean Lopez of “National Review” hopes this is the last time it will be held in January.

You can watch the event live below.

“Dobbs v. Jackson Women’s Health, the Mississippi abortion case currently before the Court, is the reason this may be the last January March for Life,” she said. “Roe was decided on January 22, 1973. If it’s overturned in June, I’m hoping the march will move to June. The march would then be in thanksgiving. And there will still be many reasons to take a stand against abortion, as the legality of abortion will likely be kicked down to the states.”

Regardless of how the court rules, the fight for the sanctity of life will continue.

“It was chilling to witness the opposition to adoption that reared its head in the wake of the oral arguments in Dobbs,” Lopez said. “Supreme Court Justice Amy Coney Barrett asked a question about safe-haven laws, which allow a desperate woman to drop a newborn off at designated areas (hospitals, fire departments), no questions asked. No complicated process. In the 1990s, there were way too many cases of women leaving babies in dumpsters.

“Would this be sufficient, Barrett asked, in establishing that a woman who gives birth is free not to parent? Unfortunately, what mainstream abortion advocates want — and I’m sorry to put it so bluntly — is a right to a dead baby.”

Abortion is not health care but the most intimate violence against the woman and her developing child, who winds up dead in the process.

“It would seem an impossible plea in these divided times, but could people of goodwill band together to make sure women know they have options that are not abortion?” Lopez said. “Most pro-choice Americans are not about shouting when it comes to abortion. It was not all that long ago when a Democratic presidential candidate said that abortion essentially was a necessary evil.”

Previous: Texas pro-life heartbeat bill wins another challenge in Supreme Court
Next: FBI continues to be mocked after originally claiming synagogue attack not connected to religion