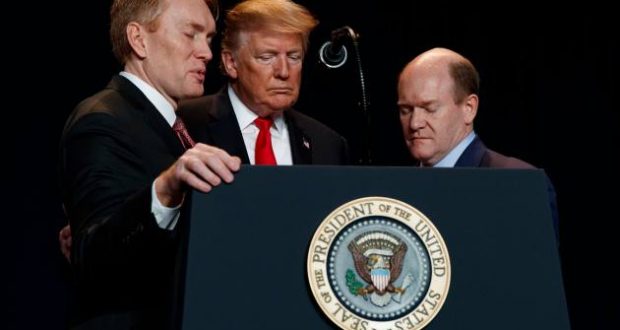 At Thursday’s National Prayer Breakfast (See our Facebook page for the video) in Washington, event co-chairs Sen. James Lankford (R-OK) and Sen. Chris Coons (D-DE) joined together in a rare moment of unity to pray over President Donald Trump.

On the heels of the president’s State of the Union Address and an especially divisive time in the nation’s capital revolving around the government shutdown that could be about to happen all over again, Lankford and Coons prayed for Trump.

“In quiet moments, as he has a gap to be able to think, we pray that You would guide him in the way to go as he leads our nation,” he continued. “Give him the insight that he needs. Give him joy in the task. And use him for Your kingdom’s sake and for our nation and the world’s sake. In the name of Jesus I ask.”

Coons then prayed, “Heavenly Father we pray for all who are in positions of responsibility and authority, and all who seek a closer relationship with You.  This morning we especially pray for President Trump and we ask that Your wisdom, Your blessing, and Your peace would be upon him and his family as they serve us, and that today You would touch his heart and all who have been with us here this morning at this National Prayer Breakfast. In Jesus’ name we pray, amen.”

President Trump also spoke at the prayer event saying, “We are blessed to live in a land where all things are possible.”

And he pointed to one of Jesus’ promises in the Bible saying “ask and you will receive” and “your joy will be complete.”

Tuesday night in his State of the Union Address, the president took a firm stand, rejecting late-term abortions with some strong language about abortionists ripping babies from their mother’s womb.

He continued his vocal opposition to these gruesome abortion procedures during his prayer breakfast speech, even quoting scripture.

“We must build a culture that cherishes the dignity and sanctity of human life,” he said. “All children born and unborn are made in the holy image of God.”

“Every life is sacred, and every soul is a precious gift from Heaven.  As the Lord says in Jeremiah, ‘Before I formed you in the womb, I knew you… Before you were born, I set you apart,'”  Trump said.

Trump Stands Up for Religious Freedom

On the religious freedom front, the president defended the importance of faith-based adoption agencies which have been under attack from the Left lately.

These agencies are being discriminated against because of their biblical beliefs about marriage and sexuality.

“We will always protect our country’s long and proud tradition of faith-based adoption. My administration is working to ensure that faith-based adoption agencies are able to help vulnerable children find their forever families, while following their deeply held beliefs,” Trump said.

Emilie Kao, director of the Devos Center for Religion & Civil Society at The Heritage Foundation, says, “Activist law firms on the Left — the American Civil Liberties Union and Lambda Legal — are trying to overturn laws in Michigan and Texas that protect the freedom of adoption agencies to operate on their beliefs.”

“Only if we put kids first and focus on their priorities can we get past this politicization and maximize the number of child welfare agencies to serve the growing number of children in need of loving ‘forever’ families,” Kao said.

Previous: Patriots’ Devin McCourty relies on God the Father
Next: Israeli scientists claim to have found cure for cancer