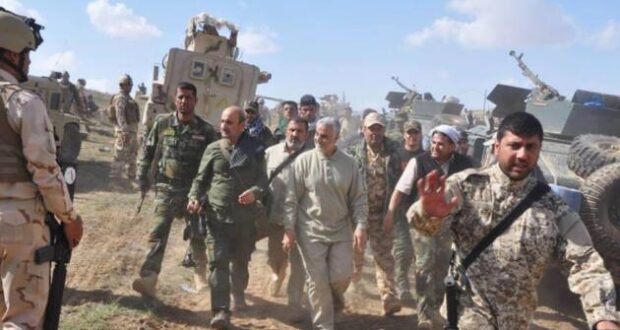 Qasem Soleimani with Iranian Revolutionary Guard troops in Syria. Soleimani was killed by the US Military in January. Photo: Iranian TV screen grab.

A combination of President Donald Trump’s sanctions on Iran, coupled with targeted strikes by Israel is apparently causing the Islamic regime to begin withdrawing from Syria.

America’s and Israel’s arch-enemy in the region has been a key supporter, along with Russia, of President Bashar al-Assad during Syria’s civil war, sending its military advisors as well as weapons, and Shi’ite militias to fight on behalf of the Syrian regime.

Israel, which monitors neighboring Syria intensively, has carried out hundreds of air strikes in Syria targeting suspected arms and troop movements by Iran and the Lebanese Hezbollah guerrillas it sponsors. The United States, under the direction of President Trump, has re-initiated serious sanctions on Iran and encouraged many other countries to do the same. There’s also a Trump-imposed oil embargo against Iran, denying it billions in monthly revenue.

The new American policy, which was in sharp contrast to that of the Obama administration,  has crippled the Ayatollah’s regime. Nevertheless, Iran publicly states  that its military presence in Syria is at the invitation of Assad’s government and that it will remain in Syria as long as its help is needed.

In January, 2020, under orders of the Trump administration, the U.S. military targeted the leader of Iran’s Revolutionary Guard and primary architect of Iran’s involvement in Syria and Iraq.  Qasem Soleimani was killed in the air strike near Baghdad International Airport. The action struck a blow to the heart of Iran’s military and shook their overt, and covert, operations across the Middle East.

One of Israel’s top priorities in targeting Iran in Syria is to keep Iran from forming a land bridge from Iran , through Iraq and Syria to Lebanon’s Hezbollah terrorists. The land route, which is a top priority of Iran, is intended to supply the Lebanese terrorists with ballistic missiles and other weaponry which threaten Northern Israel, including its third-largest city and primary port, Haifa.

But it has not come without a domestic cost for Iran whose citizens are struggling and directing their frustration at the Islamist leaders.

“Iran is significantly reducing the scope of its forces in Syria and even evacuating a number of bases,” said Bennett in his valedictory address.

“Though Iran has begun the withdrawal process from Syria, we need to complete the work. It’s in reach.”