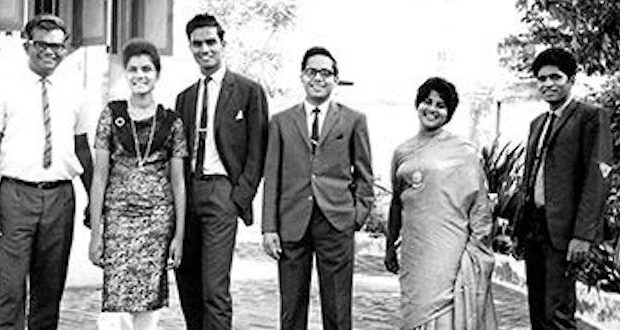 Ravi Zacharias (third from left) with Fred David (far left) and the Youth for Christ team in India in the mid-1960s.

Around the world, those who  knew or were impacted by the ministry of Ravi Zacharias are mourning his loss. The Christian apologist’s death on May 19 at the age of 74, has also led others to celebrate his life and reflect on how he himself found Christ as his personal savior. So, too, are they reflecting on the worldwide impact of the man who was committed to sharing the Gospel of Jesus Christ for nearly 50 years.

“It was his Savior, Jesus Christ, that my dad always wanted most to talk about,” wrote his daughter, Sarah Davis, on Tuesday. “Even in his final days, until he lacked the energy and breath to speak, he turned every conversation to Jesus and what the Lord had done. He perpetually marveled that God took a seventeen-year-old skeptic, defeated in hopelessness and unbelief, and called him into a life of glorious hope and belief in the truth of Scripture—a message he would carry across the globe for 48 years.”

Youth For Christ President Dan Wolgemuth said that the ministry is honored to have a place in Ravi Zacharias’ history.

“We celebrate the fact that, as part of the mission of Youth For Christ, in India many decades ago, the life of a single individual was impacted,” Wolgemuth said. “We thank God for Ravi Zacharias’ life, and we pray for his wife, Margie, and their children. His impact will last for many generations.”

On Monday during a regular prayer call among YFC leaders, Wolgemuth shared a few pages from Zacharias’ life story, where he recounted the day Ravi accepted Jesus as his Savior.

Ravi had been invited by his sisters to various Gospel gatherings in India, late in his teenage years—around the same age of those YFC serves today, Wolgemuth said. Ravi was not interested; neither the speakers nor the music appealed to him.

But for one of the Youth For Christ rallies, Ravi’s sister was to be a featured singer, so he went to support her. Many years later, he wrote that he was keenly aware of the struggle in his soul that evening and of his “continuing clouded thinking” about Jesus Christ. His real reason for attending the YFC rally was not to hear his sister sing, but to escape his pain and find “a reason to live.”

Zacharias clearly recalled the speaker that night. There was a calmness about him, as he delivered his sermon on John 3:16 in a measured tone. Ravi felt connected to the speaker and said God began to break open his heart.  When the speaker finished, he invited anyone who wanted to know Jesus to go forward.

Ravi’s hand went up—the only hand in the entire gathering.

A Youth For Christ counselor approached Ravi, led him through the Bible, answered his questions and prayed with him.

A couple of weeks later, a younger Dan Wolgemuth accompanied his mother on an airport pickup of his father, Sam Wolgemuth, who served as president of Youth For Christ from 1965-1973. Sam had been on a trip to India and talked about his disappointment that only one person had come forward to accept Christ at a rally.

“That one person was Ravi Zacharias,” Dan Wolgemuth said. “We scatter seed, and sometimes we water, but it is God who gives the increase. No doubt, over history, Ravi Zacharias has impacted millions of lives. That one single life, that one response, that one push from the Holy Spirit, changed everything—not just in Ravi’s life, but in many, many, many lives around the world.”