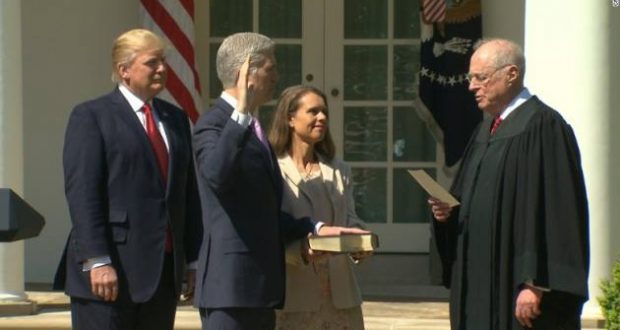 Neil Grouch takes the oath for the US Supreme Court. Photo: CNN screenshot.

The most lasting legacy of any president is the opportunity to reshape the nation’s courts. Federal judges are appointed for life and their impact lives on for generations.

As the media reviews the year 2019, the courts and successful nominations by President Donald Trump have been a major story. The consensus among both conservative and liberal media outlets is that Trump’s legacy will live on with a more conservative court landscape across the country. The U.S. Senate confirmed a historic 102 judges this year, according to the nonprofit organization Liberty Counsel.

“In contrast, Presidents Bill Clinton, George W. Bush, and Barack Obama, in eight years each, secured just two appointees to the Supreme Court and, respectively, only 62, 61, and 49 appellate judges. At the highest levels of the federal courts, then, Trump is securing appointments at about twice the rate of his three predecessors.

To emphasize the historic significance of the Senate’s confirmations this year, the number of confirmed justices in 2019 is more than twice the annual average of judges confirmed over the past several decades and the second-highest number of judicial confirmations in a single year in U.S. history. Of the 102 confirmations this year, 20 were to the U.S. Court of Appeals, bringing Trump’s total number of appointed appeals court judges to 50. To put this in perspective, President Obama appointed 55 appeals court judges during his entire eight years as president.

Despite unprecedented levels of opposition by Democrats, the Senate’s significant confirmation achievements in 2019 have helped solidify Trump’s judicial legacy. He is fulfilling his promise to appoint judges who will set aside their personal views and political prejudices to protect and honor the Constitution and the rule of law. Over the course of his presidency, Trump has appointed 187 federal judges, including 50 appeals court judges, and two Supreme Court Justices.

“This is a historic time in our nation when President Trump has appointed and had confirmed more judicial nominees than any other president,” said Matt Staver, Liberty Counsel founder and chairman. “What’s more, President Trump has consistently nominated federal judges who are committed to originalism. Judges who interpret the law according to the Constitution are critical for maintaining the rule of law and the proper balance of the three branches of government. President Trump’s legacy in reshaping the federal judiciary to one that respects the rule of law will last for decades.”

“..based solely on objective legal credentials, the average Trump appointee has a far more impressive résumé than any past president’s nominees.

And they’re young, too. “The average age of circuit judges appointed by President Trump is less than 50 years old,” the Trump White House bragged in early November, “a full 10 years younger than the average age of President Obama’s circuit nominees.”

Trump’s nominees will serve for years or even decades after being appointed. Even if Democrats crush the 2020 elections and win majorities in both houses of Congress, these judges will have broad authority to sabotage the new president’s agenda.”