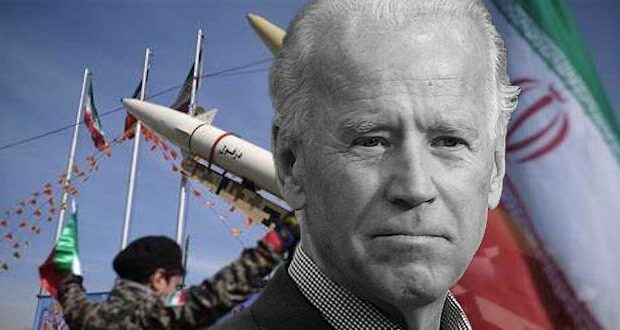 President Joe Biden has reversed course and will lift sanctions on Iran put in place by the Trump administration. The sanctions have been credited with defunding the regime, the world’s largest sponsor of terror, and providing some breathing room as the world attempts to avoid a nuclear meltdown in the Middle East.

The disturbing policy reversal comes as Iran announced it has made 55 kg of uranium enriched to up to 20%, the point at which it is highly enriched. The announcement by Iranian authorities on Wednesday was reported by Reuters.

As recently as February, Biden stated he would not lift sanctions before Iran resumes its compliance with the nuclear deal aimed at preventing the rogue regime from developing nuclear weapons.

The news comes as a shock to Israeli and America’s other allies in the region, namely Saudi Arabia, who have seen the sanctions working over the last four years. Iran regularly declares its intentions to destroy both the U.S. and Israel and is involved in a prox war in Yemen with Saudi Arabia.

READ: Biden Administration will not boycott Olympic games in China

The announcement was made in Washington as negotiating teams from the partners behind the 2015 Iran nuclear deal, known formally as the Joint Comprehensive Plan of Action (JCPOA), held talks in Vienna with Iran. The major powers are trying to convince the Islamic Republic to stop violating the agreement and cease producing enriched uranium.

“We are prepared to take the steps necessary to return to compliance with the JCPOA, including by lifting sanctions that are inconsistent with the JCPOA,” said State Department Spokesperson Ned Price.

“I’m not in a position here to give you chapter and verse on what those might be. That is precisely why we have agreed to engage in diplomacy to this effect. The precise nature of any sanctions relief is the subject of diplomacy,” Price told reporters at the daily State Department press briefing.

Price’s statement is an about-face for President Biden, who in an interview in February indicated that Iran would first have to stop enriching uranium before the U.S. would lift sanctions.

This week the UN Security Council’s five permanent members – Britain, China, France and Russia, along with Germany, resumed talks in Vienna with the Iranians. The U.S. team, led by special envoy Robert Malley, is working in a separate hotel at the insistence of the Iranians, who refuse to meet with them for the time being.

Until Wednesday, the Americans had insisted that Iran first stop its enrichment of uranium before any economic sanctions would be lifted. The Iranians refused, pressuring the Biden administration to first roll back sanctions before they would talk.

During his term in office, former President Donald Trump pulled out of the JCPOA, saying in 2018 that the Iranians had lied about their nuclear weapons program. Trump hit the Iranians with harsh economic sanctions to try and force them to scale back their nuclear ambitions and military expansion in the region.

Known for having one of the world’s most oppressive regimes, Iran’s leaders have maintained their mantra of “death to America, death to Israel,” with an explicit national policy that seeks the “total annihilation” of Israel.

Arab states in the region also fear Iran’s nuclear weapons program, with Saudi Arabia demanding that they be consulted before the U.S. makes any policy changes.

Israel has repeatedly stated it will not accept a return to the original JCPOA, under whose terms the Iranians could resume unimpeded uranium enrichment when the agreement expires.

Speaking Wednesday at the ceremony marking the start of Holocaust Remembrance Day, Prime Minister Benjamin Netanyahu directed a warning at the Biden administration and others seeking to reenter the Iran deal.

“The nuclear deal with Iran, which gives it international approval to advance the development of an arsenal of atomic bombs, is once again on the table. But history has taught us that such agreements, with such extremist regimes, aren’t worth the paper they’re written on,” Netanyahu said.

“Even to our best friends, I say: We are not bound in any way to an agreement with Iran that paves the way for nuclear weapons. We are obligated to only one thing: To prevent anyone who seeks to destroy us from carrying out their plot,” Netanyahu said.

Previous: An intellectually rigorous faith: Loving God with all our hearts AND minds
Next: Fear of Covid runs high in young adults, contrary to actual risk