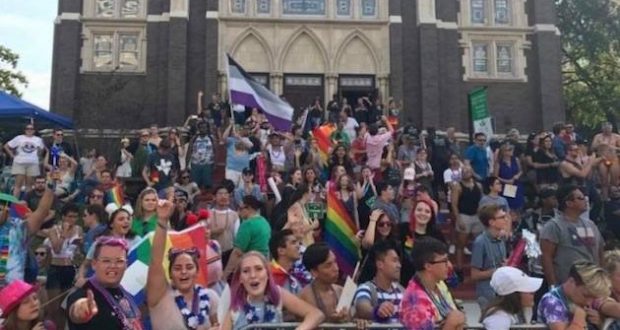 Adam Hamilton, pastor of Leawood's United Church of the Resurrection, spoke at a gay rights rally meant to influence the direction of the Methodist denomination.

The news draws varying opinions on how a split would impact the Church’s future.

The proposal, called the Protocol of Reconciliation & Grace Through Separation, would create a new conservative “traditionalist” Methodist denomination that would receive $25 million over the next four years.

Mark Tooley, president of the Institute on Religion and Democracy, noted a “denominational schism would be historic and largely the first of its kind since 1840s when Methodists and Baptists divided regionally over slavery.” He also believes a split will be “messy and often tragic,” but ultimately could allow more “evangelistic-minded Methodism to plant new congregations and grow.”

Tooley, the author of “Taking Back The United Methodist Church,” noted “many local congregations will divide and die.”

“But United Methodism is already dying in America,” he wrote. “…American Christianity and society desperately need a theologically cohesive rejuvenated Methodism. I’m looking forward to participating in a Methodist revival!”

More on the Proposal

The proposal reads, “The undersigned, in recognition of the regional contexts and divergent points of view within the global United Methodist Church, propose separation as a faithful step with the possibility of continued cooperation around matters of shared interest, enabling each of us to authentically live out our faith.”

Pressure to split one of the largest denominations in the United States has grown since last year’s special session of the United Methodist General Conference approved the so-called Traditional Plan strengthening the church’s bans on the ordination and marriage of LGBTQ United Methodists.

Approval of the plan has been met with resistance from progressive and moderate members of the second-largest Protestant denomination in the United States.

And several groups have proposed legislation to split the denomination for consideration at the next regular meeting of the General Conference this May in Minneapolis.

But members of the unofficial group of leaders who wrote and signed the agreement that was announced Jan. 3 say their proposal is the only one that includes representatives of all different theological viewpoints within the church, as well as clergy from across the global denomination. It also is signed by both the outgoing and incoming presidents of the United Methodist Council of Bishops.

The proposal is “the most comprehensive in terms of representation and leadership caliber,” according to the Rev. Keith Boyette, who leads the conservative Wesleyan Covenant Association.

“They’ve all committed to work for the adoption of this plan and to persuade the groups that they are leaders of to likewise support this plan,” Boyette said. “So it’s the most hopeful plan that has yet been proposed because of those things.”

As noted earlier, the proposal to split the Methodist denomination still needs the approval of the General Conference, United Methodists’ global decision-making body.

“All of us are servants of the church and realize that we are not the primary decision makers on these matters,” Bishop John Yambasu of Sierra Leone said in a written statement on behalf of the group that wrote the proposal.

“Instead, we humbly offer to the delegates of the 2020 General Conference the work which we have accomplished in the hopes that it will help heal the harms and conflicts within the body of Christ and free us to be more effective witnesses to God’s Kingdom.”

Yambasu helped organize a meeting in Chicago over the summer that included representatives of conservative, moderate and progressive groups and bishops from outside the United States, according to an FAQ on the United Methodist Council of Bishops website.

Sixteen United Methodist leaders then negotiated the proposal with the help of mediator Kenneth Feinberg, the attorney who oversaw the compensation fund for victims of the 9/11 terrorist attacks. They reached an agreement Dec. 17.

Among the signers of the proposal were Bishop Kenneth H. Carter, outgoing president of the Council of Bishops, and Bishop Cynthia Fierro Harvey, who recently was elected to succeed Carter.

“I think that many United Methodists are longing for an end to the conflict over this question, and I believe this protocol will provide that,” said the Rev. Thomas Berlin, one of the moderate voices in the group.

Under the proposal, conferences and individual churches can vote to leave the United Methodist Church. Those churches would be allowed to keep their properties and other assets and liabilities.

Eventually, the “post-separation United Methodist Church” would hold a special session of its General Conference to repeal the denomination’s existing ban on LGBTQ ordination and marriage.

While some believe a Methodist split will bring an end to the conflict among United Methodists, who have argued over sexuality for decades, Will Willimon, a professor of the practice of Christian ministry at Duke Divinity School and a bishop in the United Methodist Church, said in a written statement the agreement shows United Methodists’ “unwillingness to stay in conversation with fellow Christians with whom we disagree” and that they love their “take on the issues” more than the continuance of the denomination.

“Schism is always sad for a church,” Willimon said.

Previous: Reporter remembers brutality of Soleimani
Next: Thousands of Jews and Christians rally in New York to protest rising anti-Semitism