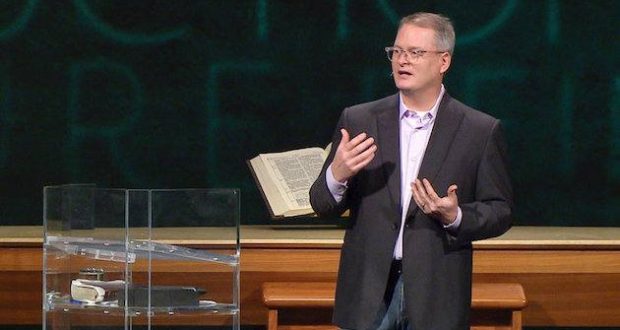 In a vote late Tuesday, delegates to the international convention of The United Methodist Church upheld its Biblical position that homosexuality is contrary to Christian teaching, The contentious vote follows days of contentious debate over the issue which included sexuality, gay marriage and the ordination of gay or transgender pastors.

Members voted down a plan developed and put forward by Adam Hamilton, pastor of Church of the Resurrection in Leawood, Kan. The church is the denomination’s largest congregation.

Hamilton has made dozens of comments from the pulpit in recent years doubting the Bible’s stance on homosexuality and preaching that Christians can support gay marriage and not be outside church orthodoxy.

Hamilton spoke against the Biblical Traditional Plan, calling it “regressive” and alienating to “centrists and progressives.” 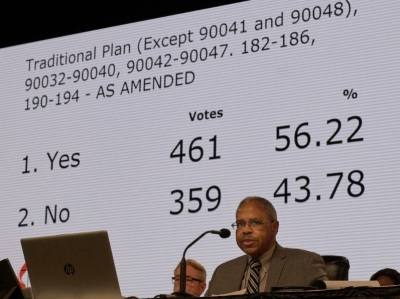 The Rev. Joe Harris presides over the legislative committee while the results of a vote approving the Traditional Plan as amended by 461-359 are displayed. The vote still needed to be approved by the plenary session on Feb. 26, the final day of the special session of the 2019 General Conference of The United Methodist Church in St. Louis, Missouri.

“You’ve inspired an awful lot of people who are not really engaged in the struggle before,” said Hamilton to Traditional Plan supporters, garnering applause and cheers. “You’ve inspired them to action. They’re mad, they’re upset, they’re hurt.”

Hamilton may be referring to the threat of dozens, if not hundreds of churches, that may leave the denomination in order for them to operate by principles not supported by the denomination’s re-inforced biblical stand.

Hamilton did not give a Biblical foundation to support his views. He has appeared at LGBT rallies in the past while, some say, ignoring those within his own congregation that uphold Biblical views on sex.

For the past several years, the UMC has been embroiled in an emotional debate over whether to change its stance, as outlined in its Book of Discipline, labeling homosexuality “incompatible with Christian teaching.”

Delegates at the UMC special session of General Conference, representing all of the global denomination, voted Tuesday to reject a measure called the “One Church Plan,” which would have allowed regional bodies of the denomination to determine their position on homosexuality.

Instead, delegates approved the “Traditional Plan” in a vote of 438-384. The Plan maintains the denomination’s Biblical stance against homosexuality, gay marriage, and the ordination of non-celibate homosexuals while promising to better enforce those rules.

Mark Tooley, president of the theologically conservative Institute on Religion & Democracy in Washington, D.C., celebrated the vote result against the “One Church Plan” on Twitter.

At the 2016 General Conference, delegates passed a recommendation creating a “Commission on a Way Forward,” which was meant to analyze the denomination’s position on LGBT issues.

Made up of a theologically diverse group of UMC leaders, the commission sought to create suggested proposals aimed at ending the divisive debate and possibly avoid a schism.

In April 2017, the UMC Council of Bishops announced that there was going to be a special session of General Conference in St. Louis, Missouri, on Feb. 23–26.

“The purpose of this special session of the General Conference shall be limited to receiving and acting upon a report from the Council of Bishops based on the recommendations of the Commission on a Way Forward,” explained the Bishops in an official letter.

The two major plans that the commission recommended that were among those considered by the UMC delegates were the “One Church Plan” and the “Traditional Plan.”

The One Church Plan would punt the decisions to regional bodies and congregations in determining their own stance on homosexuality. This plan was supported by a majority of the Council of Bishops and the denominations liberal leaders like Hamilton.

The Traditional Plan would maintain the UMC’s position against homosexuality, while offering stricter enforcement and possibly a “gracious exit” for pro-LGBT congregations.

During the special session, while the delegates voted Monday to advance the Traditional Plan to a plenary vote, the One Church Plan and a pro-LGBT “Simple Plan” were both voted down. The One Church Plan was still submitted in a minority report.

On Tuesday, delegates voted to reject substituting the minority report in a vote of 374 in favor to 449 against, effectively killing the One Church Plan.

Many delegates offered their opinions on the floor as to which plan they preferred. Ble Leon Nathan Ake of Cote D’Ivoire argued in favor of the Traditional Plan.

“The Bible tells us that we need to stay faithful to the Word,” he said through an interpreter. “It’s God’s plan, it’s the will of God, it is the biblical way.”

“Jesus told the little children to come when the disciples tried to shoo them away,” said Warren on the floor Tuesday. “Don’t shoo us away. Let us come.”

Even after the One Church Plan was voted down, hours were spent debating various amendments to the Traditional Plan proposal.

From there, several “points of order” were entertained, many brought by individuals who expressed opposition to the Traditional Plan.