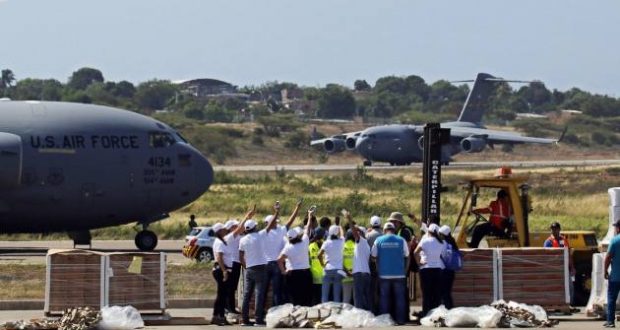 Over the weekend U.S. military cargo planes carried out an order by President Donald Trump in the Colombian border city of Cúcuta. They carried 180 tons of humanitarian aid for neighboring Venezuela, which continues to endure a prolonged economic, political, and social crisis.

The Air Force C-17 aircraft, which arrived from Miami, carried the shipments of U.S. aid since Venezuelan opposition leader Juan Guaidó rejected the legitimacy of Venezuelan regime leader Nicolas Maduro on Jan. 23, invoking the constitution to declare himself interim president of the crisis-stricken nation.

Guaidó has used his new title to rally aid from countries around the globe, even as Maduro consistently denies the existence of a humanitarian crisis, centering the international dispute over the future of Venezuela on supplies currently being stockpiled in Cúcuta.

The United States has pledged $20 million to alleviate the suffering in Venezuela caused by widespread food and medicine shortages, and rampant hyperinflation, which makes even the most basic of products unattainable.

“This wasn’t the first, and it won’t be the last,” USAID Administrator Mark Green announced to international press awaiting the arrival of the shipment. “More is on the way.”

The heavily guarded warehouse in Cúcuta is one of three points from where an attempt will be made on this Sunday to deliver the aid into Venezuela; Guide’s opposition hopes that will drive a wedge between Maduro and military forces who continue to support him, despite popular discontent. The other two locations are Roraima in northern Brazil, and the Dutch Caribbean island of Curacao.

When the day comes, military figures will face the choice of disobeying Maduro’s orders and letting the much-needed supplies into the country, or remaining loyal to him and blocking the aid’s entry, potentially sparking a confrontation with crowds desperate for food and medicine.

Maduro, who says the decline of his country is a result of U.S.-imposed sanctions and that Venezuelans “are not beggars,” complicated efforts by using an oil tanker and shipping crates on Feb. 6 to barricade a bridge that was intended to be used to deliver the aid, sparking an international standoff over Venezuela at the border.

“Over 50 metric tons of humanitarian aid from the U.S. is now in Colombia. The post-Maduro future of military leaders in Venezuela will depend in large part on whether or not they allow that aid to reach the people of Venezuela,” U.S. Sen. Marco Rubio (R-Fla.) tweeted about the blockade. Rubio visited Cúcuta on Feb. 17 to discuss distribution plans.

Even with firm backing from the United States, Colombia, and Brazil, how and whether the aid will get across the border is uncertain.

While Guaidó has said hundreds of thousands of volunteers—including many of the Venezuelan diaspora living across Latin America—have signed up to carry supplies across the border, whether they will mobilize in the face of potential repercussions from a military force that’s been widely criticized for human-rights abuses remains to be seen.

Previous: 3 reasons slimming down with your sweetheart pays
Next: Luke Bryan sees senior dog’s sad story online, so family adopts him at age 18