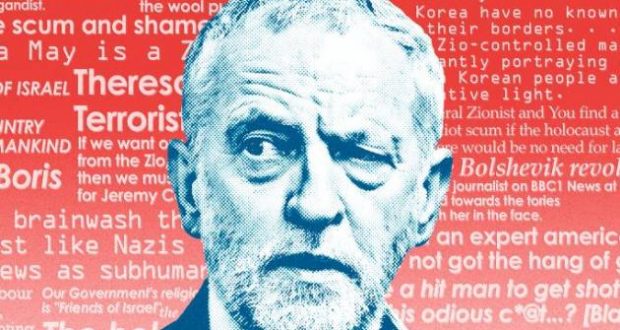 This montage shows the Labour leader with some of the anti-semitic, violent and misogynistic comments taken verbatim from the pro-Corbyn Facebook groups exposed by The Sunday Times

US to push back against British Labour Party’s hatred

Is Britain about to elect a liberal, anti-Semitic Holocaust denier? American and British Jews fear it could be a reality but have gotten support from the Trump administration in fighting back against the Labour leader.

Secretary of State Mike Pompeo told Jewish leaders in New York that the United States would “push back” against Labour Party leader Jeremy Corbyn for any actions he may take against his country’s Jews, The Washington Post reported.

Corbin, who has been repeatedly accused of anti-Semitism, is openly anti-Israel and very sympathetic to the Palestinian cause, including failing to call out acts of terrorism by Hamas against Israeli citizens.

The Laabour Party is to England what the Democrat Party is to the United States. It’s filled with many young, liberal, idealistic voters espousing socialist activism. The Labour Party platform mirrors that of its American cousin. On the other side are the Tories, formerly led by Margaret Thatcher in decades past, which is often compared to American Republicans. Its possible new leader is often compared to a British Donald Trump.

One British newspaper printed a bombshell investigation that reveals the full extent of anti-Jewish, violent and abusive comments on Facebook groups mobilizing Corbyn’s most fervent supporters.

More alarming is that his twelve most senior staff, including the shadow chancellor, John McDonnell, are members of groups containing anti-Semitic and violent comments, including praise for Adolf Hitler and threats to kill Theresa May, the prime minister.

The most comprehensive investigation conducted into 20 of the biggest pro-Corbyn Facebook groups found the anti-Semitism and hatred for Israel runs wide and deep within the party.

Critics say Corbyn has allowed growing anti-Semitism to go unchecked in his party, including Holocaust denial and the promotion of anti-Jewish conspiracies.

Several members of the party have even quit in protest.

With Theresa May stepping down as prime minister, Corbyn has the opportunity to take her place.

During his closed-door meeting with Jewish leaders Pompeo was asked if Corbyn “is elected, would you be willing to work with us to take on actions if life becomes very difficult for Jews in the U.K.?”

Pompeo reassured them he would.

“It could be that Mr. Corbyn manages to run the gantlet and get elected. It’s possible,” Pompeo stated. “You should know, we won’t wait for him to do those things to begin to push back. We will do our level best,” he said.

“It’s too risky and too important and too hard once it’s already happened,” he said.

Corbyn’s supporters say he is wrongfully accused of anti-Semitism for merely promoting Palestinian rights. Though critics point out that Corbyn’s views are not based on fact but on a well-oiled Palestinian propaganda machine that paints them as the victims in the conflict and disregards the fact that their leaders have refused to participate in the current peace process.

A Labour spokesman told The Post that the party is “fully committed to the support, defense and celebration of the Jewish community and is implacably opposed to antisemitism in any form.”

Last month, Britain’s Equality and Human Rights Commission announced it would investigate whether Labour “unlawfully discriminated against, harassed or victimized people because they are Jewish.”