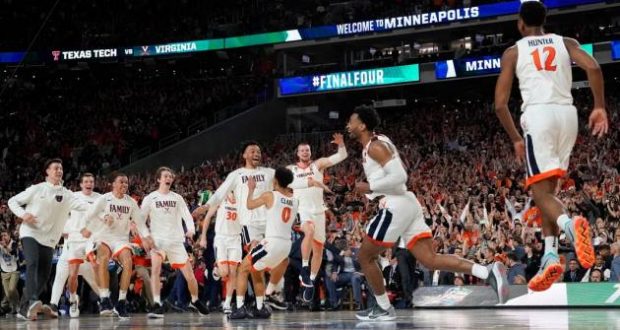 In a thrilling upset, the Virginia Cavaliers are the national champions of college basketball after a heart-pounding overtime victory over the Texas Tech Red Raiders last night in a game that went back and forth throughout the night.

It’s the first NCAA Championship for the Cavaliers, and they had to work for all of it. Texas Tech kept coming and coming, closing gap after gap until they forced an overtime before the Cavaliers settled it with their impeccable free throw shooting.

Virginia pulled away early in the first half but Texas fought back. UVA later managed to regain the lead with a 3-pointer by Ty Jerome right before halftime, taking the score to 32-29.

In the second half, Virginia came out swinging with a 3 by sharp shooter Kyle Guy. After a scoring run, the Cavaliers were up 40-31 before Tech’s Brandone Francis made a 3 to begin closing the gap again.

Later, Kyle Guy came back with another 3-pointer, giving Virginia an impressive 53-43 lead.

Then with 4:15 left in the game, Tech’s comeback kicked into high gear. Matt Mooney drained one from the arc for 3, followed by another 3 by Davide Moretti. Then Jarrett Culver made a nice move to the basket for 2 to take the lead back. With the score at 66-65, victory looked possible for Texas Tech.

Then with 14 seconds left, UVA’s Deandre Hunter drained a clutch 3-pointer, tying the score and sending the game to overtime. Then it was settled at the free throw line where the Cavaliers clinched their spot as national champs.

UVA’s 6′ 8″ Guard Braxton Key said, “It’s a blessing. I mean, I told my uncle Ralph (Sampson) after the game that we did it for him. Because obviously he didn’t get one. He’s so great full for this program. And he kind of made everything happen for this program and just put it on the map. It’s not even about us. I mean, it’s the fans, and Charlottesville.”

Kyle Guy said, “Yeah, we came in together and said that we were going to win a National Championship, and to be able to hug each other with confetti going everywhere and say we did it, it’s the greatest feeling I’ve ever felt in basketball.”

It was a big moment of redemption for UVA after losing in the first round of 2018, despite being the top-ranked team that year. Some had called that stunning defeat the greatest NCAA upset of all time.

“I think there was a bigger plan going on here, and I wasn’t needed, but I was used in it. I hope that it’s a message for some people out there that there can be hope and joy and resiliency,” Bennett said.

“I’m thankful for what happened. That’s why I did what I did at the end,” he said. “When that horn went off, I just put my head down and said, ‘Thank You. I’m humbled, Lord, because I don’t deserve to be in this spot, but You chose me to be here, and I’ll give thanks.’ And I told our guys in the locker room, I said, ‘Put your arms around each other, take a look at every guy in here, look at each other. Promise me you will remain humble and thankful for this. Don’t let this change you.'”

Previous: Movie on MercyMe’s hit ‘I Can Only Imagine’ impacting China
Next: Polls indicate dead heat in Israeli election