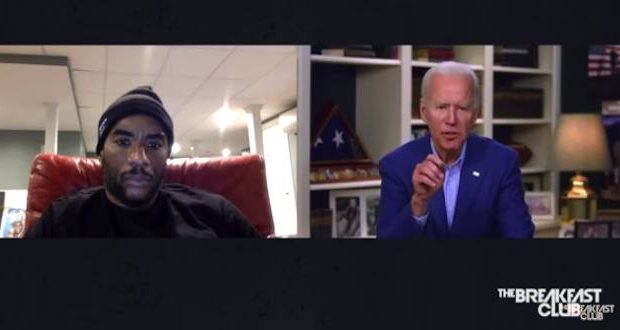 Democrat presidential candidate Joe Biden made an extraordinary claim to the black host of The Breakfast Club radio show.

Biden, who has remained in seclusion in his Delaware basement for the last six weeks, had been scheduled to appear on several media outlets on Friday. From the conversation, it appears Biden was not ready for the tough questions from host Charlamagne, and ended up making the startling claim towards the end of the interview.

In the closing 18 minutes of the New York show, Biden, as he was literally interrupted by an aid and told he was done, challenged the blackness of African-Americans’ if they undecided who to support on Election Day.

Newsone.com reports that “Biden answered Charlamagne’s questions from the start with a liveliness we haven’t seen since he was on the debate stage. When Charlamagne told Biden he had been critical of him, Biden quickly shot back with no hesitation: ‘You don’t know me!’ Charlamagne also accused Biden of being ‘MIA during this global pandemic’ in comparison to other leaders…”

“I’m following the rules, man!” Biden said defending himself. “It’s not hurting me” he said as he questioned President Trump’s response. “The more he talks, the better off I am,” Biden stated then mentioning polls show him leading Trump nationally.

The interviewer pointed out that polls can be “illusions,” but Biden contends 2020 is “totally different” from 2016 strangely saying it’s because of the coronavirus killing off Americans. He blamed that directly on Trump’s response.

Biden failed to mention the latest polls in the 15 states that matter. A CNN poll found Trump leading in every single one of the 15 swing states he won in 2016. Not only is he leading, but by numbers often higher than his 2016 margin of victory in many of those states. The poll also found black American support for Trump three times higher than it was in 2016. It now approaches 30 percent.

As the topic moved to Black voters and Democrats taking them for granted, Biden openly admitted that Black people are owed from his political party. But he questioned the premise that he has not always been supportive of “Black folks’” causes.

Biden cited Delaware as having the 8th largest Black population in the U.S. for proof of his so-called Black card. According to the U.S. Census, however, Delaware ranks 33rd in the nation for Black population. Biden, who has two mansions, has lived in Delaware most of his life.

“I get overwhelming support from the Black leadership, young and old,” he said. “Give me a break here, this is where I come from!”

Biden also went on to claim he was the only person “who worked in the projects.”

Biden then softened his stance on legalizing marijuana, contradicting his previous claims that he thought it was a gateway drug. He attempted to cite marijuana studies on whether it affects the long-term development of the brain.

“We should wait until the studies are done,” Biden asserted, adding “I think science matters.”

But host Charlamagne pointed out the fact that science has been studying the effects since at least the 1940s. “I think we have decades and decades of studies from actual weed smokers, though.”

To which Biden surprisingly responded that he knows a lot of individuals who smoke pot. “Yeah we do – I know a lot of weed smokers.”

As the conversation turned to Biden’s running mate, the former Vice President appeared to pander to black women. “I’m not acknowledging anyone who is being considered,” Biden said, “but I guarantee there are multiple Black women being considered.”

With that, Biden could be heard being interrupted and pulled away from the phone by his handler who attempted to stop the interview.

The attempts were unsuccessful and Biden continued to speak into the phone in a clip that has since gone viral.

“If you have a problem figuring out whether you’re for me or Trump then you ain’t black!”

The phone line then went dead.

Watch the clip below:

See more of the interview here: