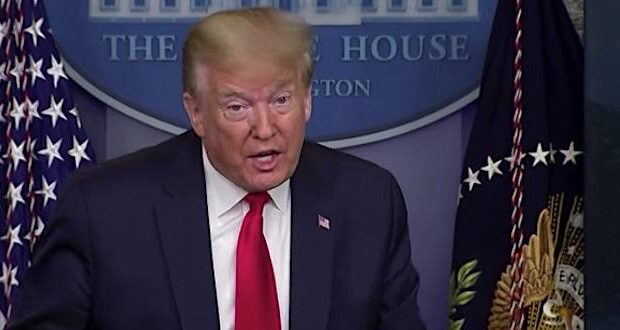 President Donald Trump sided with the nation’s houses of worship in their calls for governors and cities to allow them to freely worship. Trump called on all state governors to immediately reopen churches during a White House briefing Friday.

“People are demanding to go to their church, their synagogue, their mosque,” stated the President. “Millions of Americans embrace worship as an essential part of life.”

The president, looking weary from leading the nation through its greatest crisis since World War II, then talked about the love of religious leaders for their people. “The ministers, pastors, rabbis, imams and other faith leaders will make sure their congregations are safe as they gather together and pray,” he stated, “They love their congregations, they love their people.”

Trump then spoke directly to the nation’s governors and local government authorities.

“The governors need to do the right thing to allow these very essential places to open, right now – for this weekend,” Trump challenged. “If they don’t do it I will override the governors. In America we need more prayer, not less,” he said.

His comments came as the CDC is announced new guidelines specifically for houses of worship as essential places.  Trump said it’s “not right” for governors to identify businesses like liquor stores as essential rather than churches.

Across the nation, courts have struck down what many have charged are unconstitutional restrictions on the freedom to assemble and of religion. From Washington to Wisconsin, those calling for re-opening are finding courts agreeing with them.
Trump acknowledged that municipalities and state governments are failing in their equal protections for people of faith, and businesses guaranteed in the Constitution and Bill of Rights.

The news comes a day after the White House and the Centers for Disease Control and Prevention said they had finally reached an agreement on how to reopen churches — with the president saying, “We got to get our churches open.”

“If they don’t do it, I will override the governors,” President Trump said.

The release of guidance information had been previously delayed, after disagreements within the White House and the CDC. The original document was 68 pages, but reportedly shelved by the White House that had concerns it was too controlling in its guidelines on how Americans should respond. The CDC then released its revised 60 page document, detailing guidance on reopening schools, restaurants, public transit and other businesses.

The guidelines present a phased reopening plan that still encourages social distancing, while avoiding mass gatherings of thousands of people when possible.

“Limit gatherings, events, and extracurricular activities to those that can maintain social distancing, support proper hand hygiene, and restrict attendance of those from higher transmission areas,” the guidelines state.

Editor’s Note: Story has been updated to include link to new guidelines issued by CDC.