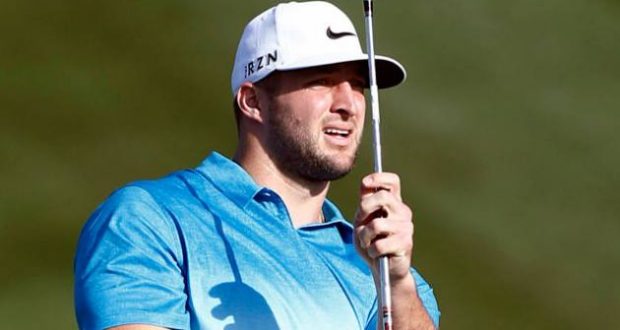 Tim Tebow knows how to keep his cool under pressure. The former NFL quarterback turned minor league baseball player knew just how to respond after someone yelled “Jesus” at a golf range and it was all captured on video.

Tebow was participating last week in the Wrangler Celebrity Shootout in Atlanta to support his foundation’s annual “Night to Shine.”  The event gives thousands of people with special needs a VIP-prom experience

Paul McAfee, a retired punter for the Indianapolis Colts who now hosts “The Pat McAfee Show,” was the emcee of the golf event.

READ: Tim Tebow reflects on how his NFL career ended.
McAfee would offer his comments as each celebrity hit 10 balls in an attempt to win $10,000 for the charity of their choice.

He had his camera rolling when after one of Tebow’s swings, McAfee’s show producer yelled “Jesus.” And without hesitation, Tebow responded, “Loves you.”

McAfee’s tweet about Tebow’s response to the Lord’s name being taken in vain quickly went viral with more than 1.8 million views.

Although he did not win the cash prize, Tebow did impress everyone at the tournament.

“Tim Tebow…exactly how you would think he is. Incredible human,” McAfee told Fox News. “Very nice.”

The New York Mets outfielder, who’s newly engaged to former Miss Universe Demi-Leigh Nel-Peters, recently revealed that his “Night to Shine” event holds a special place in his heart. It was through the event, he explained, that the couple met.

“I’m most excited for her to see how much it means to me,” he said in a video tweeted on Jan. 30. “I think she’s been able to see that in a lot of ways. But it’s just my favorite.”

“That’s how we met is basically through “Night to Shine,” Nel-Peters admitted. “That’s what brought us together. God works in such incredible ways – ways that we would never be able to understand. Someone told me that day God winked. I think that was a God wink moment.”

“To experience Tim’s favorite night of the year with him. It will let me learn more about him and understand more,” she added.

Tebow’s new movie that he co-executive produced with his brother Robby will be released in theaters on Feb. 22.

The inspirational movie, titled “Run The Race,” is about two brothers with an unbreakable bond. The story follows the life of Zach and David, two fictional brothers grieving their mother’s death and father’s sudden abandonment.