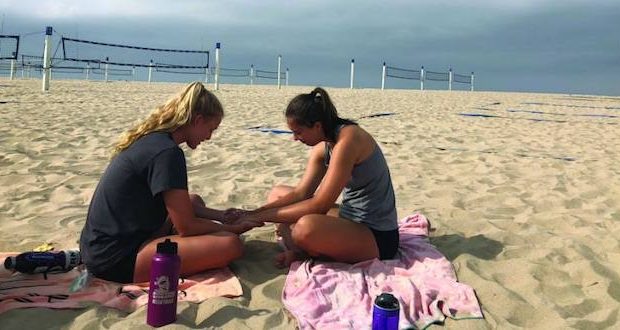 Growing up excelling in volleyball, Sierra Crook had a nagging concern as a college player—that the sport’s culture communicated to coaches and athletes that they were only as valuable as how well they played on a particular day.

Crook had an honest conversation with God about this, especially as she watched her younger sisters becoming involved at the club volleyball level. She asked God if He cared about the sport she loved and how His children were being affected by it. What she sensed after her prayer was that God not only cared about these coaches and athletes, but he wanted Crook to join Him in shifting culture in and through the volleyball world.

That path came about through an internship with Fellowship of Christian Athletes (FCA, www.fca.org) Volleyball, where she learned what it looks like to have an intimate, personal relationship with God. She also learned that the most authentic discipleship and leadership was simply pursuing God and inviting others in close enough to see it.

But once Crook’s two internships were over, FCA Volleyball offered her a full-time job as Director of Internships and Camps. Crook wasn’t sure that was in her game plan, as she was just starting life-after-college, but God had different ideas.

“God just started bringing up memories, saying, ‘You’ve seen college kids create Kingdom movements,’” Crook said. “[God said], ‘That’s what FCA Volleyball is going after, and I have called you to this. This is what I’m asking you to do—step out.’”

Crook said yes—to FCA Volleyball and to God—and moved to Huntington Beach, California, in January 2018 for the new post. She believes coaches and athletes have the ideal platform to join God in what He’s doing, and has a heart to see those in the volleyball world know what it is to restore relationship with God and be developed into missional leaders on their teams and campuses.

To get to Crook’s work with FCA Volleyball today, one would have to rewind about a decade, when volleyball enthusiast Daniel Rich started the FCA Volleyball ministry. At first, skyrocketing numbers of Camps and participants indicated success. But during the summer of 2010, Rich was convicted that bigger ministry wasn’t necessarily better—and that FCA Volleyball was falling short of creating authentic, deep discipleship.

That fall, Rich and 25 to 30 of his closest advisers reimagined the ministry. The dream moved from adding hundreds of athletes to focusing on a few handfuls of college interns at a time—and then watching God multiply through them.

“It’s been about Him planting great leaders in places that are very desert-like,” Rich said. “College volleyball was that for me.”

The FCA Volleyball internships, like the one that was so instrumental in Crook’s life path, center around a 10-week summer experience for college volleyball players. Nearly every minute of the experience is built around deepening discipleship—with God, in community and eventually as outreach.

Today, FCA Volleyball continues to bear good fruit, although some of its original architects aren’t there to see it firsthand. Rich, for example, is now the FCA State Director for Hawaii. Crook is the most obvious product of the ministry leadership pipeline, but FCA Volleyball’s reach has also touched the men’s and women’s national and Olympic teams. It extends into the travel clubs around the country. And it’s sweeping through the college ranks.

Previous: “Best tournament of the year” benefits Pancreatic Cancer research
Next: Nigeria on fire: A day in the life of their Christians