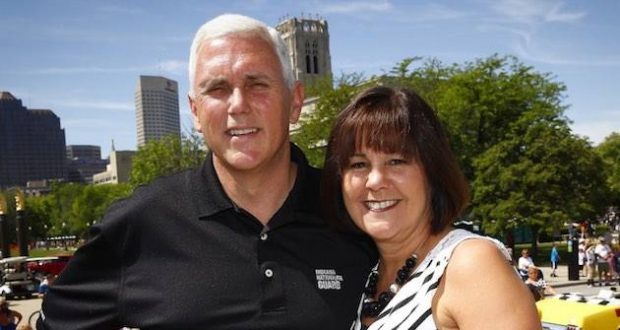 Vice President Mike Pence has shared that he and his wife felt blindsided by the furor that broke out earlier this year when his wife Karen took a job at a Christian school.

Karen Pence found herself at the center of a media storm in January for accepting a part-time job teaching art at Immanuel Christian School in Annandale, Virginia.

The school has a strong Christian ethos and requires staff to sign a statement of belief with biblical positions on marriage and sexual ethics.

The statement includes a clause stating that the term ‘marriage’ has “only one meaning; the uniting of one man and one woman in a single, exclusive covenant union as delineated in Scripture” and that, “God intends sexual intimacy to occur only between a man and a woman who are married to each other.”

Applicants for a job are also asked to swear that they will follow biblical standards of moral conduct, with the school’s list of misconduct including adultery, engaging in homosexual or lesbian sexual activity, or having a transgender identity.

The affirmation of the school’s faith beliefs extends to students and their parents, who are warned that children may lose their place “if the atmosphere or conduct within a particular home, the activities of a parent or guardian, or the activities of the student are counter to, or are in opposition to, the biblical lifestyle the school teaches.”

The school’s values drew consternation from sections of the media who accused the Vice President and second lady of bigotry and treating members of the LGBTQ community as second class citizens.

Addressing the controversy at an Alliance Defending Freedom event last week, Mr Pence said: “We honestly didn’t see that one coming. Our kids went to this school.”

Asked by ADF President Michael Farris how Christians should handle criticism, the Vice President said the answer was prayer.

Encouraging prayer, Pence stated, “Number one is spend more time on your knees than on the internet.”

“As a Christian believer, we’re charged to pray for our loved ones, but also pray for our enemies,” he said, quipping, “You have lots of opportunities in politics to do that.”

He added: “Forgiveness is a great gift.”

Elsewhere in the conversation, he commended President Donald Trump’s strong pro-life stance, saying that he “stands without apology” for the unborn.

The Vice President also remarked on the help his faith had been to him throughout his life.

“His grace has sustained me, my wife, my family and does every day,” he said, adding, “Make time for renewing your mind.”