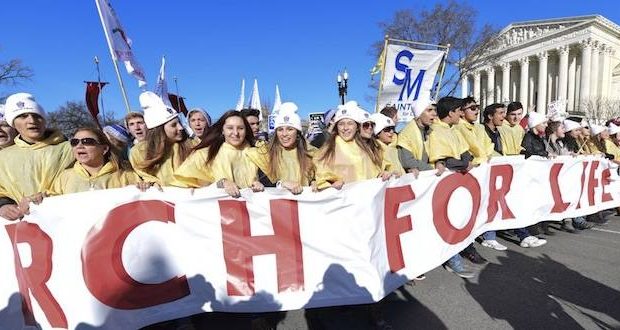 As reported by Metro Voice just minutes after it was announced, President Donald Trump will make history today by being the first U.S. President to appear in person and speak at the national March for Life in Washington D.C.  In its 47th year, it is one of the largest marches of any kind in the nation each year and the most public pro-life event.

The rally and march will be broadcast live on several cable networks and on Youtube.

Or watch on television by finding your local station HERE.

Trump tweeted the news of his appearance Wednesday, writing:  “See you on Friday… Big Crowd!

The president’s appearance could increase the size of the crowd back to record levels Over 750,000 attended the march and rally five years ago in response to policy decision by the Obama administration that the pro-life community saw as threats to children and mothers.

Pro-life groups across the nation responded with amazement and gratitude for President Trump and his commitment to the life issue.

In 2019, Vice President Mike Pence made at surprise appearance on stage saying, “We gather here because we believe as our founders did that we are all of us, born and unborn, endowed by our Creator with certain inalienable rights, and one of these rights is the right to life.”

Then he introduced a special guest who addressed the crowd from the White House. “This is a movement founded on love and grounded in the nobility and dignity of every human life,” President Trump said. “When we look into the eyes of a newborn child, we see beauty and the human soul and the majesty of God’s creation. We know that every life has meaning and that every life is worth protecting.”

The proclamation declared, in part:

All Americans should celebrate this decline in the number and rate of abortions, which represents lives saved.  Still, there is more to be done, and, as President, I will continue to fight to protect the lives of the unborn.  I signed into law legislation under the Congressional Review Act that allows States and other grantees to exclude organizations that perform abortions from their Title X projects.

My Administration has also issued regulations to ensure Title X family planning projects are clearly separated from those that perform, promote, or refer for abortion as a method of family planning; to protect the conscience rights of healthcare workers and organizations, including with respect to abortion; and to ensure the Federal Government does not force employers that object, based on religious belief or moral conviction, to provide insurance for contraceptives, including those they believe cause early abortions.  Additionally, I have called on the Congress to act to prohibit abortions of later-term babies who can feel pain.”