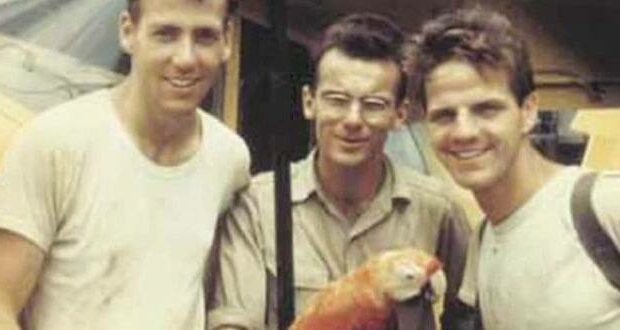 Wheaton College plans to reword a plaque honoring Christian martyr Jim Elliot and the four missionaries killed by the Waorani people in Ecuador.  At issue is language referring to the tribe as savages.

In a letter sent to students, faculty and staff, the Illinois-based evangelical college’s president, Philip Ryken, said some individuals recently expressed concerns that the language on the plaque was offensive.

The plaque reads “For generations all strangers were killed by these savage Indians. After many days of patient preparation and devout prayer, the missionaries made the first friendly contact known to history with the Aucas.”

There’s just one problem. The Quichua tribe’s word for the Waoroni people means “savage” in their language. At the time of the murders, the tribe was known as the world’s most violent people. Anthropologists contend they were in danger of self-genocide. Studies have found that most males in the tribes ended up dying violent deaths as well as 75 percent of women and children.

It is that reality that causes the tribe to use the term themselves.

In fact, one of those who played a part in the murder of the missionaries, Menkaye, wrote a book in 2013 titled, “Gentle Savage Still Seeking the End of the Spear.” 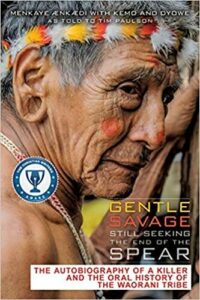 In a translated interview with translator Tim Paulson, Menkaye said he chose the word “savage” as part of the title “because it’s been stated in the outside world that the days of spearing among the Waorani are over, which is far from the truth. It’s still very much a way of life, especially for the Tagaeri and the Taromenane who remain isolated and intentionally out of reach by even the upriver Waorani. But even among the upriver Waorani, who have had significant contact with the outside world, spearing is far from over.”

That history may be lost in the debate as is most history involving “cancel culture.”

Wheaton now finds itself wiping away language and history that the Waorni people are comfortable using and talking about.

“Specifically, the word ‘savage’ is regarded as pejorative and has been used historically to dehumanize and mistreat indigenous peoples around the world,” Ryken wrote. “Any descriptions on our campus of people or people groups should reflect the full dignity of human beings made in the image of God.”

The class of 1949 dedicated the plaque in memory of Edward McCully and Elliot, who were murdered while sharing the Gospel of Jesus Christ to an unreached people group in Ecuador. The plaque stated that Elliot and McCully and their colleagues “went to the mission field, willing for ‘anything — anywhere, regardless of the cost.’ They chose the jungles of Ecuador – inhabited by the Auca Indians for generations all strangers were killed by these savage Indians. After many days of patient preparation and devout prayer the missionaries made the first friendly contact known to history with the Aucas.” 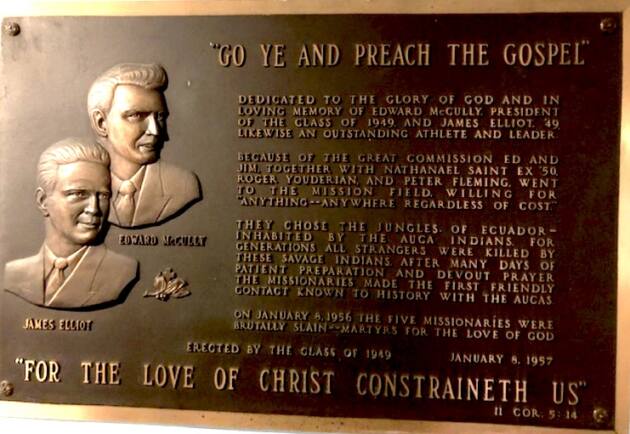 Elliot’s wife, Elisabeth, and their 3-year-old daughter, Valerie, went to live with the tribe that killed her husband to share the gospel with them two years after his death. She wrote in her best-selling book, Through Gates of Splendor, that Auca is actually the Quichua term for “savage.” She went into further detail when she wrote The Savage, My Kinsman that detailed her experience living among the Aucas.

Joseph Moore, Wheaton’s director of marketing and communications, said the administrative cabinet decided to update the plaque to “continue to honor the sacrificial witness of the five missionaries it honors while at the same time avoiding the unnecessary offense of pejorative stereotypes.”

“This is especially important for a story that is central to our mission and identity — a story we want the world to know. Wheaton College will always honor Jim Elliot and Ed McCully — along with Nate Saint, Roger Youderian and Pete Fleming — who died in service to spreading the gospel of Jesus Christ,” Moore wrote. “In the 64 years since the college received this gift, we have also continued to grow in our understanding of how to show God’s love and respect to others.”

The University may have missed one important element in the decision. They have so far not revealed if they have reached out to the descendants of the tribe for their input. That could prove more problematic than the term itself.

Metro Voice is an Amazon Affiliate. Your browsing helps fund our efforts at Christian journalism.