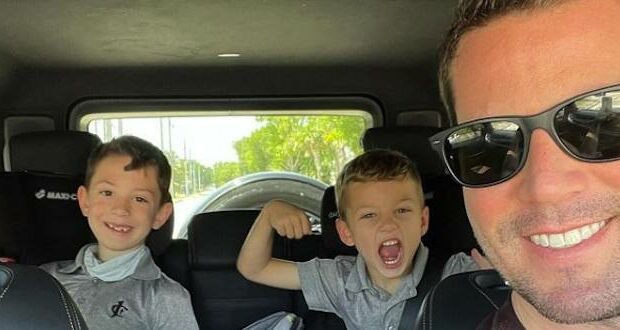 Seth Dillon, ownder of The Babylon Bee, with his kids. Photo: Dillon's Instagram.

Why a funny Christian satire website is under attack

In 2017, a fan named Seth Dillon bought the Christian satire site, The Babylon Bee. However, since becoming the owner, Dillon has become a primary target for censorship by the left.

But you would have to wonder why. The site pokes good-natured fun at everything and everyone, from the modern-day church and Christian music to Donald Trump and pop culture. But it is the satire directed at what’s happening on the left in the country that is under attack. Liberals, they say, can’t take a joke.

It’s gotten so bad that the fact-checking website “Snopes” has been criticized for rating the humor as “False” while even some liberal outlets like The Washington Post have said Facebook and Snopes are wrong for censoring the humor site.

“We’ve gotten into a couple of situations where if we joke too much about targets [the Left doesn’t] like, then they start saying things like, ‘Oh, are these people really a satire site? Or are they a misinformation outlet that’s just trying to deceive people on purpose?’” Dillon told Charisma.

Fact-checking sites flagging the Bee’s content has become a common occurrence as cancel culture grows prevalent. Despite their self-described satire, many sites like Snopes are looking to ban Dillon and his company from the media.

A recent example came when The Babylon Bee posted a joke about CNN buying washing machines to spin its news coverage.

“It was an absurd joke, but we almost got kicked off Facebook for it because we were ‘spreading fake news’ at a time when Facebook was really cracking down on fake news,” Dillon said.

He added: “The fact-checks were always filled with this language implying that we were actually deceiving people on purpose.”

“I love a quote by G.K. Chesterton,” Dillon added. “He said that humor can get in under the door while seriousness is still fumbling at the handle. That’s a beautiful way of putting it. Humor is disarming. People let their guard down when they are laughing about things, and so it’s one of the first things that they go after, saying that they need to stop when it’s being effectively used as a tool against them.”

Meanwhile, Snopes is too busy making sure everyone knows the Babylon Bee story about CNN using washing machines to spin the news isn't literally true

However, Dillon pointed out that the satirical site is willing to make fun of itself.

“There’s a lot of self-deprecating humor, and we are willing to laugh at ourselves,” Dillon said. “That’s the whole point of satire, beyond ridiculing bad ideas and confronting hypocrisy—to get ourselves to not take ourselves so seriously, which is a very big problem in today’s world.”

Dillon believes that restrictions on free speech will ultimately negatively affect humor and that The Babylon Bee has successfully fought back to uphold free speech in comedy.

“[Comedy] is dying right now, in large part because there are so many things that they’ve put beyond the bounds where you’re not allowed to joke about them,” Dillon said. “They are restricting speech so much, it’s starting to affect even their own comedy.”

So after a manual review, Facebook says they stand by their decision to pull down this article and demonetize our page. I'm not kidding. They say this article "incites violence." It's literally a regurgitated joke from a Monty Python movie!https://t.co/U9B6tTOj6N

“We have fought back very successfully just by making a lot of noise about it, making people aware of how ridiculous it is that they are trying to mischaracterize us like this,” Dillon added.

Dillon encouraged others to stand up for freedom of speech and not bow to the increased pressure from the cancel culture.

“If we’re going to make a dent in the momentum of cancel culture that’s been sweeping us away in this big wave lately, it’s going to result, from my perspective, from people really getting a backbone,” Dillon said. “The solution is in enough people seeing boldness and bravery and enough examples where they get emboldened to stand up and fight back against it, and just be vocal about what they believe and why they believe it.”

Previous: Billy Graham chaplains encourage police as deaths rise
Next: Should we dismantle the family?