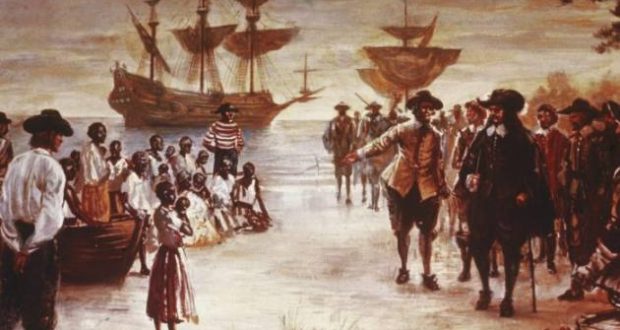 Engraving shows the arrival of a Dutch slave ship with a group of African slaves for sale, Jamestown, Va., 1619. Hulton Archive

Nikole Hannah-Jones recently changed her Twitter background to a picture of the date July 4, 1776, crossed out and replaced with Aug. 20, 1619. She would like your kids to do the same. 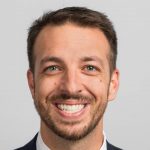 Hannah-Jones wrote the flagship essay for the 1619 Project, which is a deliberate effort by The New York Times to displace the moral authority of the signing of the Declaration of Independence as the heart of America’s founding. The project’s supporters want Americans in the future to consider the advent of slavery in America as “our true founding.”

As an attack on the Founding Fathers generally, the 1619 Project is neither new nor unique. What is novel about the 1619 Project, however, is the cultural scope that its social justice purveyors are attempting to reach.

Before a new regime can be set up, the moral legitimacy of the old must be torn down.

We should see the 1619 Project for what it is: part of a comprehensive attempt at political revolution. It seeks to transform the American republican regime, which is based on equal rights for individuals, into one defined by identity politics and the unequal treatment of identity groups.

The 1776 founding contains the moral justification for the former, while the 1619 Project contains that of the latter. Before a new regime can be set up, the moral legitimacy of the old must be torn down.

This quotation from Adams contains the key to understanding the 1619 Project.

If there had been no transformation in “the minds and hearts of the people” before political tensions with England erupted into a physical revolution, the American colonists likely would have replaced the British regime with one exactly like it in the United States. In their “minds and hearts,” they would have remained subjects of a monarch.

As Adams explained, the “minds and hearts” of the colonists changed when their sentiments in regard to their “duties and obligations” changed. Previously, they had felt a duty to obey the British king, who claimed a right to rule them as their superior. Gradually, the colonists came to understand that no one—not even a king—has a right to rule them without their consent.

The colonists realized they only owed “duties and obligations” to a government that provided protection for their rights. When that protection ceased, so also did their consent. And the Revolution came.

Adams prophesied after that first Independence Day in 1776 that its annual return “will be celebrated, by succeeding Generations, as the great anniversary Festival.” “It ought to be commemorated,” he said, “as the Day of Deliverance.”

To that end, towns all over America had “early instituted an annual Oration on the fourth of July, in commemoration of the Principles and Feelings which contributed to produce the Revolution.” Adams knew that the continuation of the republican regime in America would only be as sure as the preservation of those same “principles, opinions, sentiments, and affection” within the people themselves.

Winning the “Minds and Hearts” of Children

Similarly, the purveyors of the 1619 Project are trying to effect a revolution in the “minds and hearts” of American children today through an education curriculum tailored to its narrative.

Similarly, the purveyors of the 1619 Project are trying to effect a revolution in the “minds and hearts” of American children.

The Pulitzer Center has created lesson plans, worksheets, reading lists, interpretive reading guides, and lists of classroom activities and historical terms and events to bolster the 1619 Project. These resources are also available for homeschoolers.

For children, there are poems and pictures; for adults, there are podcasts and dramatic performances. And for all, a spoonful of outrage is meant to help the narrative go down and the right sentiments sink in.

The New York Times wants “to get this stuff taught in schools.

The New York Times Magazine boasted that its education strategy includes partnering with the Pulitzer Center’s “network of schools all around the country” in order “to get this stuff taught in schools.”

The 1619 Project follows Adams’s prescription for how to effect a revolution in “minds and hearts.” It seeks first to change Americans’ sentiments about “duties and obligations,” or justice, specifically in regard to the past evil of slavery.

Once the change in sentiments is accomplished, the transformation of opinions and affections can soon follow. At that point, the revolution is all but complete.

In a speech, launching the 1619 Project, Hannah-Jones condemned the founders with the claim that “when the country’s founding documents were written by enslavers, they were false.” No, those statements were just as true then as ever. She meant that the authors were hypocrites, that their own words condemned their actions.

As Abraham Lincoln explained, though, “they did not mean to assert the obvious untruth, that all were then actually enjoying that equality … They meant simply to declare the right, so that the enforcement of it might follow as fast as circumstances should permit.”

The 1619 Project would have school children think there is nothing to celebrate about the men and women of 1776.

The 1619 Project would have school children think there is nothing to celebrate about the men and women of 1776. That is a dangerous deception. Lincoln went on to explain exactly why all Americans should admire and celebrate what those imperfect men in 1776 found the wisdom to discern and the virtue to declare.

They “set up a standard maxim for free society, which should be familiar to all, and revered by all; constantly looked to, constantly labored for, and even though never perfectly attained, constantly approximated, and thereby constantly spreading and deepening its influence, and augmenting the happiness and value of life to all people of all colors everywhere.”

–Clifford Humphrey is originally from Warm Springs, Georgia. Currently, he is a doctoral candidate in politics at Hillsdale College in Michigan. Follow him on Twitter @cphumphrey.

Previous: Historic: Jews, Christians pray at The Hague to call nations back to Jerusalem
Next: Singer loses half her tongue to cancer but that doesn’t stop her from praising God