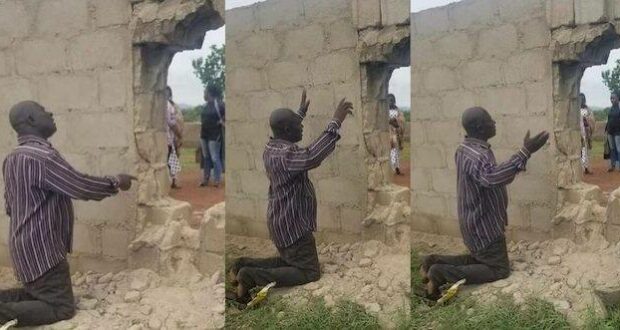 One of the fathers of the kidnapped Bethel Baptist Secondary school students was spotted praying profusely for the release of his child.

Desperate parents are holding a 24/7 prayer vigil outside a Nigerian school where 140 of students were kidnapped by Muslim extremists. In an emotional scene, the weary moms and dads can be seen crying out to God and praying for the return of the children with some prostate on the ground in tears.

Islamists attacked the Bethel Baptist High School in the Kaduna state of northwestern Nigeria around 1:45 a.m. Monday. That day the school was full as seniors were scheduled to take their finals for the year,  according to Christian Solidarity Worldwide.

As a result, 13 other schools in the area were closed after they were identified as not having sufficient security measures in place. Those “vulnerable” schools represented numerous other denominations and ministries.

Police in the Kaduna State Command released a statement saying that 26 students and a teacher were rescued and a search continues for the remaining students and staff.

The Islamists issued an ultimate that the children would starve unless parents supplied food for the group. The extremists also demanded a ransom Euro News reported.

Video footage released by Christian Solidarity Worldwide shows distressed mothers and fathers crying out to God and praying on the school grounds for the release of their children. One of the praying parents was a widow whose four children were taken hostage.

The mass kidnapping follows a series of abductions in an are that has become the epicenter similar attacks in recent years. The attack at Bethel Baptist High School was just one of four incidents within 24 hours, CSW reported.

Islamist terrorist groups have virtual free reign across the region and anti-education groups like Boko Haramtake young boys to be used as suicide bombers and soldiers. After months, or years, many of the kids become brainwashed and at the end of their usefulness are often killed. Young girls are raped or forced to marry Boko Haram terrorists and have children.

Children often fear to attend school, she added, because terrorists attack education centers, according to Dede Laugesen, executive director of Save the Persecuted Christians.  Laugesen says without education, they can’t get jobs to provide for themselves as adults.

Fear of kidnapping has increased the drop-out rate in high school according to Seun Bakare of Amnesty International in an interview with Voice of America.

The kidnappings have mostly fallen from the headlines since Michelle Obama launched the #BringBackOurGirls campaign.  But so bad is the situation that UNICEF Executive Director Henrietta Fore released a statement on this week expressing her concerns about the kidnappings and child abductions spreading in West and Central Africa.

“The U.N. estimates that at least 950 students have been abducted from their schools by armed men since December,” Fore said in a statement.

“Over the past six weeks alone, nearly 500 children were abducted in four separate incidents across the central and northwest parts of the country,” she continued. “Many of these children have not yet been returned. It is hard to fathom the pain and fear that their families and loved ones are suffering in their absence.”

Critics have accused the Nigerian government of being complicit in terrorist activity, as insurgent groups are allowed to continue their operations and often receive government ransoms for kidnappings even though the government denies paying ransom to terrorists.

Nigeria, Africa’s most populous nation, recently became the first democratic nation to be added to the U.S. State Department’s list of “countries of particular concern” for tolerating or engaging in egregious violations of religious freedom under the International Religious Freedom Act.

More Christians are murdered for their faith in Nigeria than in any other country.

Religious persecution watchdog group Open Doors USA ranks Nigeria No. 9 on its 2021 World Watch List of countries where Christians face the most severe persecution for “extreme” levels of Islamic oppression.