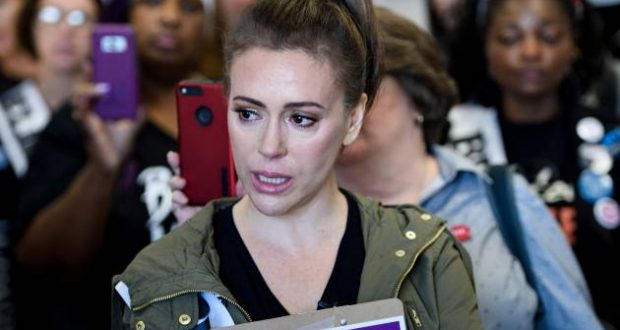 Actress Alyssa Milano, who left a mediocre acting career to become an outspoken pro-abortion advocate, is outraged by Georgia’s “heartbeat” bill. The bill bans abortions as soon as a baby’s heartbeat is detected, which can be as early as six weeks into the pregnancy.

Milano is publicly fighting the measure by partnering with other celebrities who vow to boycott Georgia if it is signed into law.  On Monday, Milano posted a list of Hollywood celebrities who refuse to business with the peach state if the pro-life bill passes.

Milano also turned to scripture in an attempt to find a biblical basis for her pro-choice stance.

“I love God. I believe in God,” she began. “But I don’t believe my personal beliefs of which we can’t confirm should override scientific facts and what we can confirm.”

Milano concluded her tweet with a quote from John 3:12, “If I have told you earthly things and you do not believe, how can you believe if I tell you heavenly things?”

Pro-life advocates swiftly called out Milano for using the Bible to support abortion.

“You don’t have to love God to acknowledge the irrefutable science that a unique, individual human life begins at the moment of conception,” said Live Action president Lila Rose. “But if you love God, then you also will love His children. He’s a father, and every single one of us are created in His image.”

“This tweet shows that you have very little knowledge of both theology and science,” ‘Relatable’ podcast host Allie Beth Stuckey chimed in.

“‘Before you were formed in the womb, I knew you’… end of story,” another user posted, quoting Jeremiah 1:5.

One user simply posted Romans 1:21-22: “For even though they knew God, they did not honor Him as God or give thanks, but they became futile in their speculations, and their foolish heart was darkened. Professing to be wise, they became fools,”
ROMANS 1:21-22 NASB

“We can’t imagine being elected officials who had to say to their constituents, ‘I enacted a law that was so evil, it chased billions of dollars out of our state’s economy.’ It’s not the most effective campaign slogan, but rest assured we’ll make it yours should it come to pass,” she said.

The actress-turned-activist has come under criticism for hoping on the protest of the day, though her activism has always centers on pro-abortion and in support of Democrat candidates. Wikipedia states “On March 8th, 2019, Milano drew criticism for a tweet she posted, saying; “I’m trans. I’m a person of color. I’m an immigrant. I’m a lesbian. I’m a gay man. I’m the disabled. I’m everything. And so are you, Kirk. Don’t be afraid of what you don’t know or understand. No one wants to hurt you. We are all just looking for our happily ever after.” Many users blasted her in response, citing her message as insensitive and ignorant, as Milano does not fit into any of the minorities she claimed to have identified with. [94] Milano originally posted the tweet in response to a user who questioned her over an earlier tweet she posted in support of International Women’s Day, where she alluded to being transgender. Milano claimed the entire exchange of tweets was to raise awareness and bring attention to the social injustices of today’s world, and later apologized.”

During the confirmation hearing for Judge Brett Kavanaugh to the Supreme Court, the actress made herself visible strategically putting herself in the audience directly behind the judge. She was criticized for statements she made about Kavanaugh that turned out to be false.

Previous: Student claims teacher said Trump not appropriate hero for school project
Next: Cannonball detonated after being on display at Kansas museum for 20 years