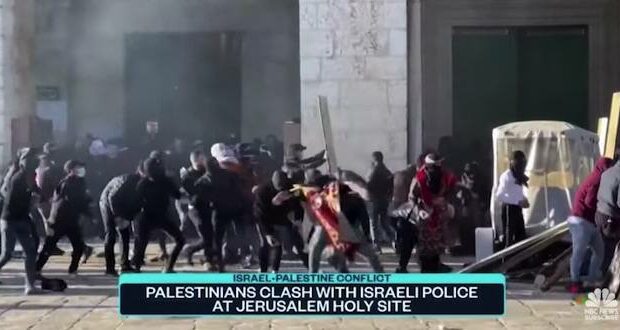 Palestinian rioters hurl rocks behind a barricade after police entered the Temple Mount to stop rioters from attacking Jews and Christians.

Israeli police continue to deal with Palestinians on Jerusalem’s Temple Mount after Muslims attacked worshippers on Passover and Easter Sunday. The violence comes after Islamic Imams preached in advance of Ramadan, that this would be the last year Israel existed.

Police accused Palestinians of “defiling and desecrating” a holy site and said, “freedom of worship will continue to be fully preserved for the worshipers on the Temple Mount.” Palestinians accused Israeli police of using excessive force and trying to divide the holy site.

“What happened in Al-Aqsa Mosque is a dangerous escalation, the repercussions of which are to be borne by the Israeli government alone,” said Nabil Abu Rdeneh, spokesman for Palestinian President Mahmoud Abbas.

On Friday, major clashes between Israeli police and Palestinian rioters on the Temple Mount wounded 158 Palestinians and three officers. Police said that around 4 a.m., dozens of young people began marching in the area. Some carried the green banners of the Hamas terror group and the Palestinian flag while other rioters threw stones at the Western Wall below. The clashes drew rare condemnation of Israeli police from Bahrain, Morocco and the United Arab Emirates, which all normalized ties with Israel under the Trump administration.

The Temple Mount is the emotional epicenter of the Israeli-Palestinian conflict. Two Jewish temples once stood there, and it also a holy site in Islam. Non-Muslims are allowed to visit the site but to preserve the fragile status quo, Christians and Jews are not allowed to pray or perform religious rituals. Christians are not allowed to bring bibles into the area. However, unorganized Jewish prayer recently has returned to the site amid a surge in Jewish visitations.

Jordan’s Prime Minister risked the peace it has with Israel when he made shocking statements of support for the rioters. “I salute every Palestinian, and all the employees of the Jordanian Islamic Waqf, who proudly stand like minarets, hurling their stones in a volley of clay at the Zionist sympathizers defiling the Al-Aqsa Mosque under the protection of the Israeli occupation government,” said Bisher al-Khasawneh.

“Instead of stoking tensions, the Jordanian Foreign Ministry is expected to calm things down and honor the sanctity of all holidays,” Israeli foreign sources said on Monday. “It is a pity that the Jordanians choose to look only at Israel and not condemn the conduct of the rioters.”

Jordan risks its economic well-being by siding with the Palestinians. The country, ruled by Hussein family dynasty which is from a very small Saudi Arabian tribe, cannot support its people. It is only through generous donations of electricity and water from Israel that it has not fallen into chaos.