Kansans for Life will hold the Annual Rally and March for Life in Topeka on Tuesday, January 25, 2022. The event has drawn thousands in the past.

The day will feature numerous events including educational workshops for teens and adults, interdenominational worship service, and a rally on the south steps of the State Capitol Building.

The special day is in memory of the 49th anniversary of Roe V. Wade that legalized abortion. Since that day in 1973, over 65 million babies have been aborted in the United States.

Registration for the march and rally runs from 8:30 a.m. until 11 and will include coffee and donuts in the hallway just south of the state capitol Visitor Center inside the north entrance. Exhibit booths will be in the first-floor rotunda. Donated baby items can also be dropped off there.

Free workshops will be held from 9:00 to 10:30 in the Capitol Visitor Center auditorium on several topics including how to lobby your legislator and understanding the Value Them Both Amendment.

A Catholic mass will be held at 10:30 a.m. at the Topeka Performing Arts Center. A non-denominational prayer service will also take place at 10:30 at the Visitor Center classroom and auditorium.

In addition to the March and Rally, events include pro-life educational booths, capitol tours, visiting legislators, and attending general legislative sessions and committees. Featured rally speakers are Executive Director of Democrats for Life of America Kristen Day and Kansas Republican National Committee Woman Kim Borchers. There will also be a Catholic youth event at the Topeka Performing Arts Center (TPAC) in the morning hosted by the Diocese of Kansas City in Kansas.

Lunch by donation will be held between 11:30 and 2:30 in the basement of Mater Dei Assumption Church nearby at 8th & Jackson.

The March for Life begins at Noon and goes from TPAC at 8th & Quincy to the south Capitol steps. The Rally for Life will run from 12:15 to 1:15 with elected officials and special speakers on hand.

Considerable attention will be given to the Value Them Both Amendment that will be on the August 2022 primary ballot.

“On April 26, 2019, the Kansas Supreme Court took power from voters and found – created – a nearly unlimited ‘right to abortion’ in our 1859 State Constitution,” stated Mary Kay Culp. Prior to this ruling, through widely supported limitations, Kansas abortion rates had been reduced by 43 percent since 1999 and partial birth abortions had been completely banned.

“Essentially, women and their preborn babies have now been abandoned to an unregulated abortion industry,” Culp states.

This year, much attention will be placed on passing the “Value Them Both Amendment” to the State Constitution by Kansas voters, Culp said.

Because of the Kansas Supreme Court’s 2019 ruling, existing bans on late-term and taxpayer-funded abortions are now in danger of being rendered unenforceable. Furthermore, the ruling allows violent live dismemberment abortions to continue and threatens these lifesaving limits:

Voters will weigh in at the ballot box this fall. A simple majority of votes is all that’s necessary.

Kansans for Life and like-minded organizations are working to pass the amendment to the Kansas Constitution, and are encouraging Kansans to continue to contact legislators and urge them to support the Value Them Both Amendment in August.

The Annual Rally and March for Life in Topeka will bring considerable attention to the issue this year.

KFL will host actor Jim Caviezel, who portrayed Jesus in The Passion, and abortion survivor Melissa Ohden at banquets held in Overland Park and Wichita in February. 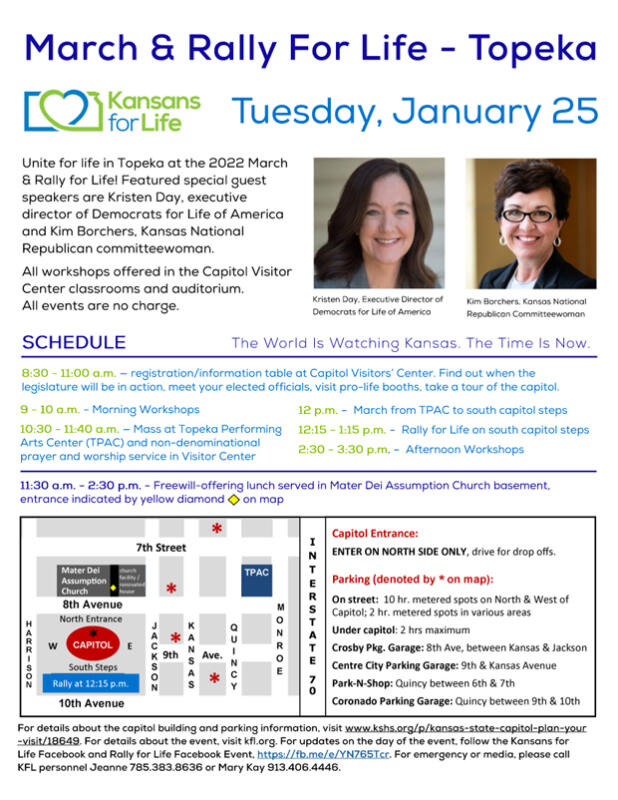 Previous: It wasn’t Wormwood of Revelation but meteor rattling nerves over Pittsburgh
Next: Kansans for Life endorses Schmidt, Estes, LaTurner and Mann in 2022