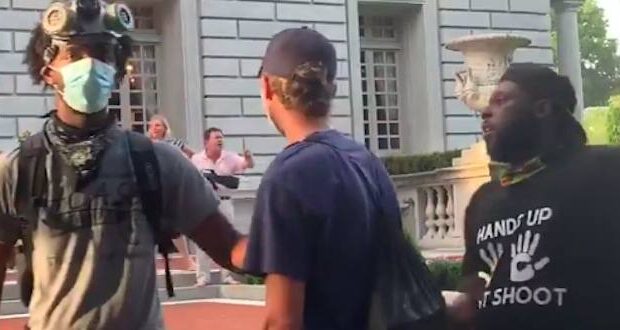 A violent weekend in St. Louis left two people dead out of thirteen who were shot. The shootings may have led one couple to brandish guns as a large group of Black Lives Matter protesters entered their gated neighborhood to protest Democrat mayor Lyda Krewson.

Video footage shows the group entering an area clearly marked “For Residents Only.”

As the loud group marched through the neighborhood, the couple appeared with guns on their front porch and told the crowd to move on.

Black Lives Matter protesters can be heard shouting “eat the rich”  with some protesters threatening to enter the couple’s home.

The couple is facing criticism for aiming their guns at the mostly peaceful crowd while others point to the violence in the city for setting people on edge.

John Ammann, a professor of justice at Saint Louis University’s School of Law, says the couple shouldn’t have aimed guns at the activists.

A St. Louis couple defends their home with guns as protesters march through their neighborhood:pic.twitter.com/LqzvrBSREu

“In Missouri, they can do open carry, so maybe holding the guns at their side was OK. But not aiming them,” he said in an email.

“And maybe someone from the neighborhood was in the protest and gave the protestors permission to be on the street,” he added.

After a 10 minute stand-off with the couple, the group eventually continued on to Krewson’s house. Video footage did not show any of the activists attempting to move toward the couple’s home though they threatened the couple.

According to property details and online profiles, the couple is Mark and Patricia McCloskey. Both are attorneys.

Numerous protests have devolved into violence in recent weeks since the death of George Floyd, an unarmed black man, in police custody in Minnesota. Hundreds of individuals have been shot with dozens murdered by violent protesters, including in St. Louis where a retired police officer was shot and killed by a looter.

Missouri has a so-called Castle Doctrine, or a law that permits people the use of deadly force if people enter their homes.

The statute, officially titled “use of force in defense of persons,” also says a person doesn’t “have a duty to retreat from a dwelling, residence, or vehicle where the person is not unlawfully entering or unlawfully remaining” and “from private property that is owned or leased by such individual.”

According to a Missouri Law Review of property law (pdf), gated communities have been affirmed in courts as being able to bar entry to non-residents who don’t receive invitations to enter.

But State Rep. Rasheen Aldridge Jr., a Democrat who was with the activists, alleged that the couple violated the law, not the protesters even as some protesters are on video verbally threatening the couple.

“So who are the real thugs, when people took to the street to address injustice in our city and local leaders,” he wrote on social media. “The people wasn’t [sic] on any property but this law firm couple decided to come and point guns at us!”

The protest was sparked by Krewson, a Democrat, reading the names and addresses of some demonstrators who met with her outside St. Louis City Hall last week. She also read suggestions submitted by the demonstrators, many of which called for defunding the police.

Late Friday, Krewson issued an apology, saying: “I would like to apologize for identifying individuals who presented letters and comment cards to me at City Hall as I was answering a routine question during one of my updates earlier today. While this is public information, never did I intend to cause distress or harm to anyone. The post has been removed and again, I sincerely apologize.”

She also said she doesn’t agree with the idea of defunding, or slashing money for, the St. Louis Police Department.

The American Civil Liberties Union of Missouri, even with her actions being legal, called what Krewson did “shocking and misguided” and activists are calling for her resignation.