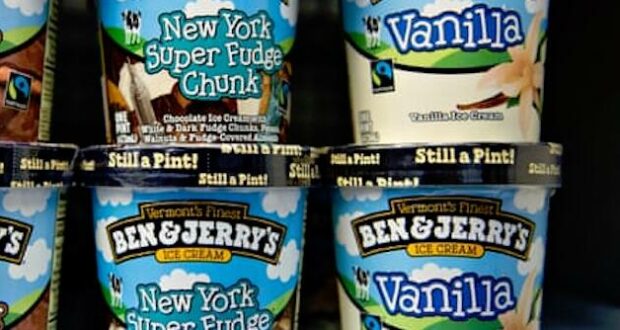 Ben & Jerry’s ice cream announced this week that it no longer will sell its products in Judea and Samaria, which they described as “Occupied Palestinian Territory.” In response, Israeli Minister of Foreign Affairs Yair Lapid demanded U.S. action.

“Ben & Jerry’s decision represents shameful surrender to antisemitism, to BDS and to all that is wrong with the anti-Israel and anti-Jewish discourse,” he tweeted. “We will not be silent. Over 30 states in the United States have passed anti-BDS legislation in recent years. I plan on asking each of them to enforce these laws against Ben & Jerry’s. They will not treat the State of Israel like this without a response.”

To date, 35 states have passed legislation against the anti-Semitic Boycott, Divestment, and Sanctions campaign against Israel.

BDS is promoted by Palestinian extremists Hamas and even Iran.

The statement from Ben & Jerry’s read:

“We believe it is inconsistent with our values for Ben & Jerry’s ice cream to be sold in the Occupied Palestinian Territory. We also hear and recognize the concerns shared with us by our fans and trusted partners.

“We have a longstanding partnership with our licensee, who manufactures Ben & Jerry’s ice cream in Israel and distributes it in the region. We have been working to change this, and so we have informed our licensee that we will not renew the license agreement when it expires at the end of next year. Although Ben & Jerry’s will no longer be sold in the OPT, we will stay in Israel through a different arrangement. We will share an update on this as soon as we’re ready.”

Judea and Samaria are the biblical heartland of Israel having been settled 3,500 years ago when Joshua and the Israelites came back from Egypt being led by Moses.

Ben & Jerry’s has repeatedly made headlines over the years for issuing provocative political statements.

Reaction around the world was swift.

Grocery stores in the US, political and cultural pundits and even the current Ben & Jerry’s licensee in Israel criticized the British multinational Unilever which now controls the ice cream brand.

Here are some of the reactions to the company’s freezing out of its business relations in Israel.

Prime Minister Naftali Bennett called the decision a “boycott of Israel” and said Ben and Jerry’s “decided to brand itself as an anti-Israel ice cream.” He was joined by Benjamin Netanyahu, who tweeted, “Now we Israelis know which ice cream NOT to buy.”

The Anti-Defamation League said it was “disappointed” by the actions. “You can disagree with policies without feeding into dangerous campaigns that seek to undermine Israel” but refraining from calling for specific actions.

Across the U.S. and around the world, Kosher grocers began dropping the ice cream from their frozen dairy aisles.