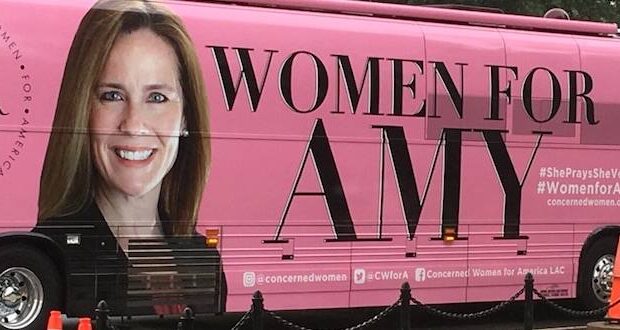 A nationwide-wide bus tour in support of Supreme Court nominee Amy Coney Barrett will stop in Kansas City Oct. 20 and 21.

The Women for Amy tour is sponsored by Concerned Women for America and is part of a twelve state effort. The tour will travel during the month of October to educate citizens in the target areas regarding the qualifications of Barrett to sit on the Supreme Court. With so many pro-life and family issues at stake, it also reinforced the Constitutional actions of the Republican-controlled Senate fill the seat before the General election.

Concerned Women for America, a nonprofit organization committed to protecting and promoting “Biblical values and Constitutional principles through prayer, education, and advocacy,” has embarked on its “Women for Amy” bus tour.

READ: Judges on the Missouri Ballot

As Barrett’s confirmation hearings began Monday, the bus stopped in the heart of the nation’s capital, Washington D.C.

Concerned Women for America President and CEO Penny Young Nance explained that her organization wanted to bring together conservative women from across the county to “voice their support on behalf of Amy Coney Barrett as she went into her hearing.”

“We were lining the streets on Constitution Avenue and welcoming her so that she knew there was support for her and women of faith in support of her nomination,” Nance explained.