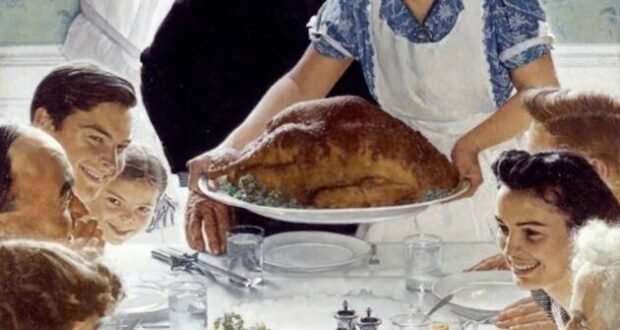 A close-up of Norman Rockwell's "Freedom From Want."

For California, the real turkey this Thanksgiving may be restrictions put on even small family gatherings. The state’s Department of Public Health (DPH) recently released new “Guidance for Private Gatherings.” The October guidance “provides an updated plan for Californians to gather outside their household and replaces the prior gatherings guidance issued on September 12, 2020 and March 16, 2020.”

The restrictions cover family Thanksgiving, Hanukkah and Christmas celebrations. Gatherings must be held outside which may be a  problem for the residents living in the colder and wetter northern part of the state.

Among the “Mandatory Requirements for All Gatherings” are these:

Wear a Face Covering to Keep COVID-19 from Spreading

Rules for Singing, Chanting, and Shouting at Outdoor Gatherings

So families with more than three households won’t be able to all meet together for Thanksgiving, unless the guidelines change. And they’ll have to meet outside for turkey and pumpkin pie. And they can’t sing the Doxology unless they do so, “below the volume of a normal speaking voice. 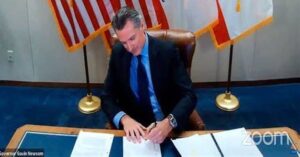 The state guidance also explains that counties and cities may have their own guidelines for what is allowed at private gatherings – so some families may face even more restrictions. The state has also “created an exception to the prohibition against mass gatherings for faith-based services, cultural ceremonies, and protests.”

The guidelines were released just as the World Health Organization was warning against lockdowns, due to their negative economic impact – not to mention the high cost of loneliness, depression, domestic abuse and substance abuse that have increased with the COVID-19 quarantines. They also came out as researchers questioned the effectiveness of lockdownsin slowing the spread of the virus.

California’s initial emergency executive order, issued in March by Governor Gavin Newsom, included an enforcement mechanism: “This Order shall be enforceable pursuant to California law, including, but not limited to, Government Code section 8665.” That code says that those found guilty of violating the state order could be subject to fines of up to $1,000, imprisonment of up to six months, or both.

Some cities and counties in California have also created their own penalties for quarantine violations.

It’s not known if municipalities will patrol neighborhoods counting the number of cars at residences on Thanksgiving, Hanukkah or Christmas

–Wire services and Focus on the Family

Previous: NEEDTOBREATHE album ‘Out of Body’ was worth the wait
Next: How monasteries and empire builders helped mold the modern-day office