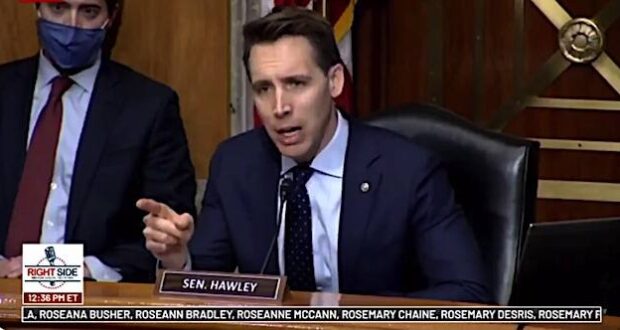 Rockhurst High School in Kansas City is being pressured to join the cancel culture over an alumnus. Critics of Missouri Sen. Josh Hawley are harassing the school, calling on it to speak out against Hawley.

Hawley, a 1998 graduate of Rockhurst, says he represented his Missouri constituents in his effort to reject the election results in several states. Some even accuse him of “nonverbally” inciting those who stormed the Capitol building. Hawley, however, never called for violence or even a march on the capitol but rather issued a statement calling for the violence to end and people who broke the law to be prosecuted. President-elect Joe Biden, detouring from what his supporters called a unity tour, has now likened Hawley to Nazi propagandist Joseph Goebbels. Biden was condemned last year by Jewish groups after he compared Trump to Nazis.

Rockhurst High President David J. Laughlin recently acknowledged that people had asked the institution to take action in a letter to “The Rockhurst Community.”

“Indeed, calls have come to Rockhurst from across the country to condemn alumnus Josh Hawley, filled with judgment for his actions, motivations, inspirations and purpose,” Laughlin wrote. “All of these have been communicated to Rockhurst with factual certainty from the senders’ perspective regarding Sen. Hawley.”

Laughlin did not directly condemn Hawley and pointed out that the Catholic school does not endorse political candidates nor parties.

“I call upon all of our elected officials, including our graduate Sen. Josh Hawley, to conduct their own examination of conscience on this matter,” the letter continued. “If wrong occurs, one ought to seek atonement and reconciliation. These are the Christian principles Rockhurst teaches when wrong has occurred.”

Hawley, 41, is a respected Constitutional scholar and served as Missouri attorney general before being elected to the U.S. Senate in 2018. He has been described as the protégé of former Missouri Republican Sen. John Danforth, who says he now regrets taking Hawley under his wing.

Hawley said in a statement last Thursday, “I will never apologize for giving voice to the millions of Missourians and Americans who have concerns about the integrity of our elections. That’s my job, and I will keep doing it.”

The move to condemn Hawley is part of a nationwide effort by the left, and some say fueled by the media, to marginalize conservatives who supported President Trump in the 2020 election. Republicans now report being banned from using certain banking institutions, Airbnb, and other companies.