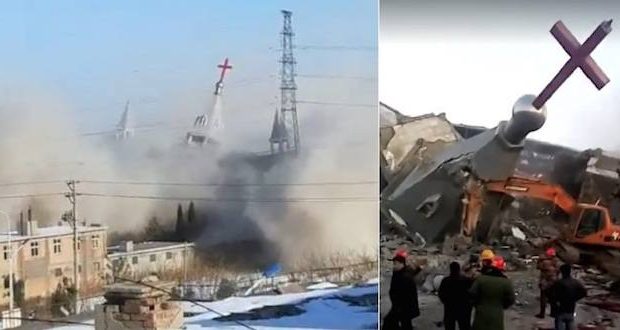 Chinese authorities have blown up with dynanmite a well-known Christian megachurch, inflaming .

Witnesses and overseas activists said the paramilitary People’s Armed Police used dynamite and excavators to destroy the Golden Lampstand Church, which has a congregation of more than 50,000, in the city of Linfen in Shanxi province, according to Chris Baynes reporting for The Independent newspaper www.independent.co.uk.

The newspaper reports that ChinaAid, a US-based Christian advocacy group, said local authorities planted explosives in an underground worship hall to demolish the building following, constructed with nearly $2.6m (£1.9m) in contributions from local worshippers in one of China’s poorest regions. 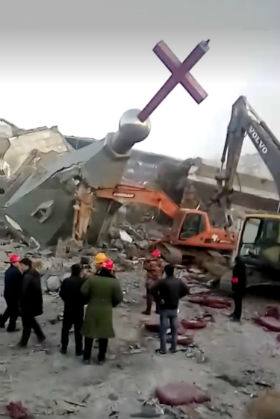 The church had faced “repeated persecution” by the Chinese government, said ChinaAid. Hundreds of police and hired thugs smashed the building and seized Bibles in an earlier crackdown in 2009 that ended with the arrest of church leaders.

Those church leaders were given prison sentences of up to seven years for charges of illegally occupying farmland and disturbing traffic order, according to state media.

There are an estimated 60 million Christians in China, many of whom worship in independent congregations like the Golden Lampstand. Millions of Christians, Buddhists and Muslims also worship in state-sanctioned assemblies.

But the surging popularity of non-state-approved churches has raised the ire of authorities, wary of any threats to the officially atheist Communist Party’s rigid political and social control.

Freedom of religion is guaranteed under China’s constitution, so local authorities are often seen as using technicalities to attack unregistered churches. Charges of land or building violations and disturbing the peace are among the most common.

The state-run Global Times newspaper reported the official reason for the demolition was the building did not hold the necessary permits.

“A Christian offered his farmland to a local Christian association and they secretly built a church using the cover of building a warehouse,” a government department official was quoted as saying.

Religious groups must register with local religious affairs authorities under Chinese law, the report said, adding the church was illegally constructed nearly a decade ago in violation of building codes.

Pictures distributed by ChinaAid showed the church’s steeple and cross toppled in a large pile of rubble.

“The repeated persecution of Golden Lampstand Church demonstrates that the Chinese government has no respect for religious freedom or human rights,” said ChinaAid president and founder Bob Fu.

He added: “ChinaAid calls on the international community to openly condemn the bombing of this church building and urge the Chinese government to fairly compensate the Christians who paid for it and immediately cease these alarming demolitions of churches.”

A pastor at a nearby church, who spoke on condition of anonymity, said he saw large numbers of paramilitary police on Tuesday surrounding the area around the church, which was being taken apart by heavy machinery. He later heard a loud explosion.

The Golden Lampstand Church was built by husband and wife evangelists Wang Xiaoguang and Yang Rongli as a permanent home for their followers.

The couple had been preaching around Linfen since 1992, establishing congregations in improvised spaces such as factory dormitories and greenhouses.

While authorities did not block the church’s construction, they later cracked down on it, and the couple and other church leaders were sent to prison.

ChinaAid said authorities also demolished a Catholic church in Xi’an, the capital of Shaanxi province, on 27 December. Officials smashed crosses and confiscated statues, the Eucharistic altar, and other religious artefacts as they demolished the building with heavy machinery, the organisation said.

The demolition prompted more 100 church members to protest in front of government offices this week.

Previous: Why Adam Hamilton is wrong about scripture and the UMC
Next: Recently released letters from Einstein reveal faith, humor, fear of Nazis