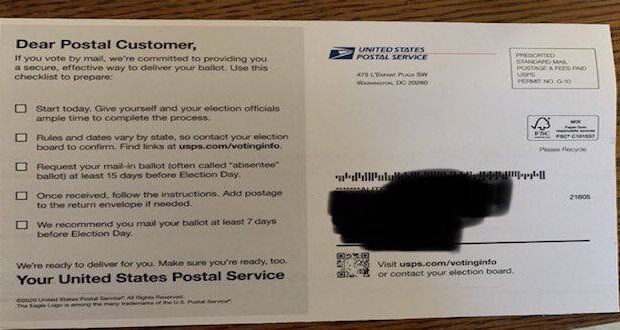 A judge granted a temporary restraining order Saturday evening in favor of Democrats in Colorado. Democrats had filed suit to prevent the US Postal Service (USPS) from mailing postcards encouraging residents to make sure their mail-in ballots are received by election day.

Election watchers have responded by accusing Colorado Democrat leaders of trying to create confusion on and after election day rather than prevent it. The notices being sent out by the Postal Service to all Colorado residents encouraging those who plan to vote by mail to request ballots early and send them in advance of the Nov. 3 election. To most that seems reasonable.

READ: What you need to know about mass mail-in voting

That’s not sitting well with Colorado’s elected Democrats. Across the nation, the party’s leaders have been encouraging their supporters that President Donald Trump may likely win on election day but that after mass mail-in ballots are counted (which could take months), the election results will be overturned with Vice President Joe Biden then being declared the winner. If no winner is determined by inauguration day in January, experts say that the Constitution outlines that Nancy Pelosi would become president until a winner is determined.

That scenario has Republicans encouraging voters to show up at the polls in person to ensure their votes are are counted by election day. A recent poll found that twice as many Republicans now plan to vote in person (66%) vs. Democrats (27%).

Colorado Democrats say the postcard could confuse and disenfranchise voters. That’s why they asked the Federal Court to issue an order to block the mailers.

The U.S. Postal Service and its postmaster general, Louis DeJoy said the mailer is a national one that has already been sent to a majority of U.S. residents and is not intended to be a guide to local election laws governing mail-in voting.

“The main message of the mail-piece is that voters should plan ahead, educate themselves about voting options available in their jurisdiction, and, if they choose to vote by mail, to give themselves enough time to receive, complete and return their ballot,” said David Partenheimer, spokesman for the USPS.

Mass mail-in ballots differ from traditional absentee ballots. Mass mailed ballots are sent to every person, and in some cases, every address, in a state without the benefit of voter identification making sure they’re received by the intended voter. Traditional absentee ballots, such as that used by President Trump and others who may be away from their district on election day, ill, or in a nursing home, require identification and must be requested by specific voters. Absentee ballots ensure that a voter is the person requesting the ballot. Mass ballots favored by Democrats take away all insurances that the voter’s ballot is not filled out by someone else.

Previous: Mike Pence shares he was once a Democrat but left over pro-life issues
Next: One in five evangelicals believe gender identity is a choice