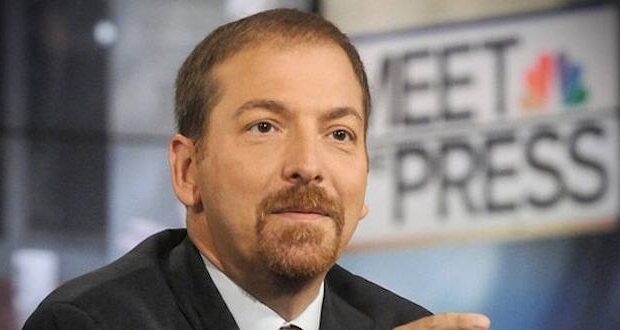 Chuck Todd, host of Meet the Press. NBC has again been forced to admit that it edited a video which fundamentally changed the accuracy of a report.

In another example of what media analysts say is media bias, NBC admitted spreading an edited video clip of Attorney General William Barr that was abruptly cut off, dramatically altering the meaning of what he said.

“Earlier today, we inadvertently and inaccurately cut short a video clip of an interview with AG Barr before offering commentary and analysis. The remaining clip included important remarks from the attorney general that we missed, and we regret the error,” NBC’s “Meet the Press” said in a statement on social media after criticism from the Trump administration.

The admission came after Chuck Todd, host of the Sunday morning show, aired a brief portion of Barr’s recent lengthy interview with CBS.

“Well, history’s written by the winners. So it largely depends on who’s writing the history,” Barr said in the interview.

Todd ended the clip there.

Barr went on to say in the interview: “But I think a fair history would say that it was a good decision because it upheld the rule of law. It helped, it upheld the standards of the Department of Justice, and it undid what was an injustice.”

Barr was speaking about the Department of Justice submitting a motion to dismiss the case against former national security adviser Lt. Gen. Michael Flynn.

Todd said on his show that Barr’s answer was cynical, if correct.

“I was struck, Peggy, by the cynicism of the answer. It’s a correct answer. But he’s the attorney general. He didn’t make the case that he was upholding the rule of law. He was almost admitting that, yeah, this is a political job,” Todd said.

Barr explicitly said during the interview that he believes moving to drop the Flynn case “upheld the rule of law.”

NBC didn’t respond to inquiries about how the clip was altered, whether the network will take punitive action against those involved, or whether Todd watched the Barr interview in full before making his erroneous remarks.

A transcript of “Meet the Press” posted on NBC’s website did not include a correction or editor’s note.

See the edited version and full version of the clip below

The completely dishonest editing by Chuck Todd on Meet the Press is exposed below.

Attorney General Bill Barr DID “make the case” that he was upholding the rule of law, but Todd uses deceptive editing to leave that part out.

Todd, known for his often unfactual reporting and snide remarks about Republicans, has not addressed the issue.

The same alteration was made on May 8 by MSNBC’s “Morning Joe,” which abruptly cut Barr off after he said, “It largely depends on who’s writing the history.”

“And there you go, Willie,” Joe Scarborough, one of the show’s hosts, said after the edited video clip ended. “It’s written by the winners, that tells you all you need to know. Might makes right. The rule of law doesn’t matter.”

MSNBC didn’t respond to an inquiry on whether “Morning Joe” would offer a similar statement to “Meet the Press.”

The decision to air the disinformation drew harsh criticism from the White House.

Kerri Kupec, a Department of Justice spokeswoman, shared side-by-side transcripts of “Meet the Press” and Barr’s full answer to CBS.

Kupec said she was “very disappointed by the deceptive editing/commentary” by Todd, adding: “Compare the two transcripts below. Not only did the AG make the case in the VERY answer Chuck says he didn’t, he also did so multiple times throughout the interview.”

White House press secretary Kayleigh McEnany also took aim at Todd, writing in a statement that the clip was an example of “completely dishonest editing.”

“Attorney General Bill Barr DID ‘make the case’ that he was upholding the rule of law, but Todd uses deceptive editing to leave that part out,” she added.

President Donald Trump called for Todd to be fired, saying what happened was an example of fraud.

“He knew exactly what he was doing,” he said in a statement. “Public Airwaves = Fake News!