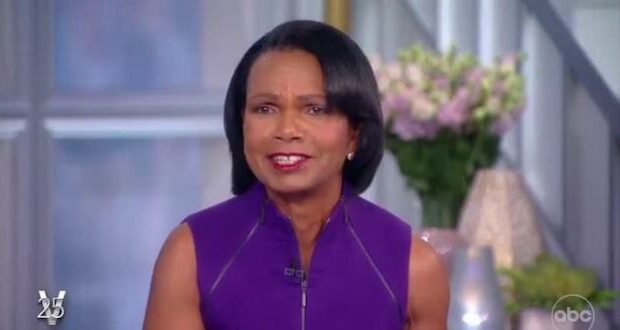 Condoleezza Rice on CRT: “We don’t have to make white kids feel bad for being white”

Condoleezza Rice, former secretary of state for President George W. Bush, said making “white kids feel bad for being white” is not the way to empower black children. Her comments came during in an interview on “The View” last week where the hosts argued with her in their support of critical race theory.

Co-host Joy Behar said parents need to accept whatever is being taught in public schools and, if they’re unhappy with it, “they’re going to have to homeschool their kids.”

“Well, they’re actually homeschooling them in increasing numbers, and I think that’s a signal,” Rice responded, noting the mass exodus over the last 12 months. “First of all, parents ought to be involved in their children’s education. I think parents ought to have a say. We used to have parent-teacher conferences. We used to have PTAs. There are lots of ways for parents to be involved, and they should be.

“I would like black kids to be completely empowered, to know that they are beautiful in their blackness, but, in order to do that, I don’t have to make white kids feel bad for being white.”

CRITICAL RACE THEORY TARGETED IN VA. GOV. RACE: A key debate in upcoming races has been how much of a voice parents should have in their child’s school curriculum when it comes to subjects like sex education and critical race theory — the co-hosts and @CondoleezzaRice discuss. pic.twitter.com/OGppOwLXD1

Lead co-host Whoopi Goldberg interjected to say teachers who are good at their job will merely educate their students on the historic problems of racism in hopes they won’t repeat the mistakes of the past.

Rice responded that she, of course, has “no problem” telling kids “what happened. But let’s remember, history is complex. Human beings aren’t angels now, and they weren’t angels in the past. And so how we teach about our history is also important.”

Those comments frustrated co-host Sunny Hostin, who claimed parents across the United States. are angry because teachers are finally teaching the “real” history of America and they don’t want to reach a point of “true racial reconciliation.”

“Come on now,” Rice said. “People are being taught the true history, but I just have to say one more thing. It goes back to how we teach the history. We teach the good and we teach the bad of history. But what we don’t do is make 7- and 10-year-olds feel that they are somehow bad people because of the color of their skin. We’ve been through that, and we don’t need to do that again for anyone.”

Rice, who is Republican, was immediately attacked by CRT proponents and others on the left.

Former MSNBC host Touré Neblett called Condoleezza Rice a “soldier for white supremacy” in a scathing op-ed on Friday over her criticism of critical race theory.

“Condoleezza Rice’s recent appearance on The View was offensive and disgusting for many reasons but she was who we thought she was: a soldier for white supremacy. Her thoughts on Critical Race Theory are completely white centric, as in, they revolve around the thoughts and needs of white people,” Neblett, who goes by his first name, wrote for The Grio.