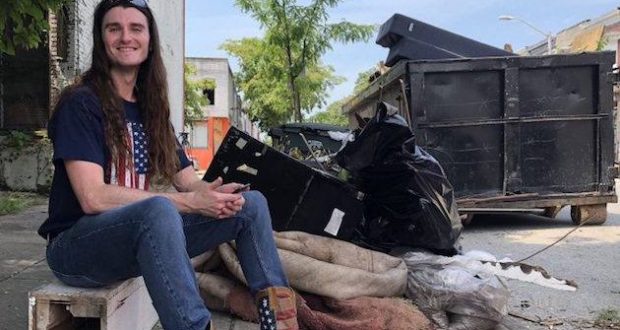 Some 200 volunteers combed through the streets of northwest Baltimore on Aug. 5, cleaning up trash and weeds in an “Americans Helping Americans” event organized by conservative activist Scott Presler.

Starting at 7 a.m. at the corner of North Fulton Avenue and Westwood Avenue, the volunteers spread through the surrounding blocks. By 8 p.m. they had collected over 12 tons of trash—destination junkyard.

Many locals expressed gratitude to the participants, and some joined in, Presler said in a phone call.

While not covered by the media, thousands of black Baltimore residents have demonstrated and voiced their support for President Trump’s statements about their living conditions and the inability of the city’s Democrat leaders to address their concerns. 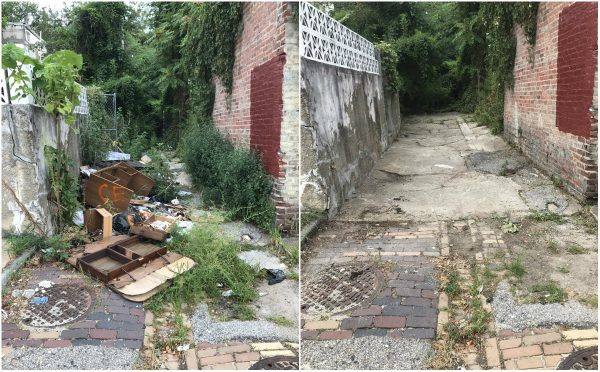 “Before” and “after” images of an alley during a trash cleanup event in Baltimore, Md., on Aug. 5, 2019. (Courtesy of Scott Presler)

He learned from talking to the locals that “the people of Baltimore love their country and love their city and they’re proud to live there,” but the government is not doing enough to solve the trash problem—specifically illegal dumping at abandoned buildings.

The city has struggled with trash in its streets for years and its shrinking population has left some 16,000 uninhabitable empty houses. Many of the homes are in an unsafe condition, and the city owns many of them. They told Presler that the city only comes once a year to clean up the alleys.

The idea to organize a cleanup came to Presler after President Donald Trump recently chided Rep. Elijah Cummings (D-Md.) for squalid conditions in the congressman’s district, which includes downtown and West Baltimore.

“I’m so tired of people saying, ‘We should do this, we should do that’ … I was just like, ‘I’ve had it. I’m going to go to Baltimore, even if it’s just me on a street corner picking up trash,’” he said in a prior interview.

He put out a notice on July 28 to his more than 300,000 followers on Twitter, asking if anybody wanted to join him. By the next day, he had almost 100 volunteers; about half of them from Baltimore and the rest from across the country.

The majority of the participants were conservatives and Trump supporters—those being most of Presler’s followers, he said. Those joining on the spot were likely of differing political leanings too.

“Scott, I don’t agree with your political stance,” a woman told him in a Facebook message a day after, he said. “But I want you to know that I love what you did and I want you to include me in the next cleanup you do.”

“That to me was the coolest part,” he said. 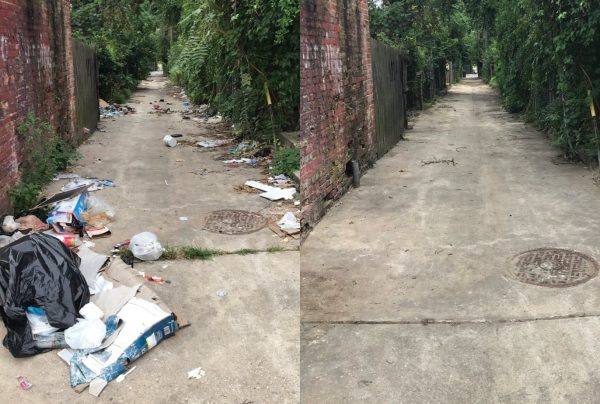 Presler initially kept details of the event under wraps, concerned that protesters, such as from the violent far-left “Antifa” of the “anti-fascist” group, may show up.

One “Antifa” activist posted the location of the event on Twitter on Aug. 5, calling Presler a “neo-fascist” and accused him of coming to Baltimore “making like … doing a cleanup of the city.”

“Are you going to come help?” Presler responded. There seemed to be no response from the activist.

There were no issues during the event itself, Presler said, apart from the fact that they could use more dumpsters.

More to Come in Baltimore

Presler said he’d been contacted by one of the volunteers who’s putting together another cleanup in Baltimore and already has 30 volunteers. Presler would like to make it a monthly occasion. Another man is putting together a similar event in Los Angeles. Prelser plans to help with that effort too.

The effort has caught the attention of some local and right-leaning media but was ignored by the national press. The White House official Twitter account thanked the volunteers in an Aug. 6 post, sharing one of Presler’s images, which shows an alley before and after the cleanup.

“This one event is having a national impact,” Presler said. “This one cleanup is making a difference.”

Previous: Groups back President’s warning of video game-linked violence
Next: The not-so golden silence of the Nigerian diaspora