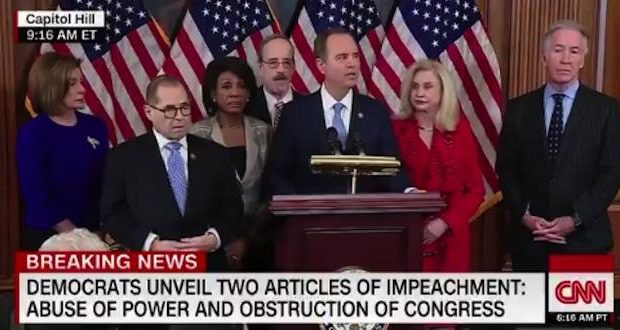 Democrat leaders announce Articles of Impeachment before quickly leaving the press conference without taking any questions from reporters.

The change from yesterday’s wall-to-wall coverage could be a sign of the weakness of the charges, though Democrats are expected to have the votes even while several of their members express their doubts about the effort.

In the Dec. 10 press conference Judiciary Chair Jerry Nadler said the two articles that form the basis of charges are abuse of power and “obstruction of Congress.”

Nadler stated that the President “engaged in unprecedented, categorical, and indiscriminate defiance of the impeachment inquiry,” prompting the obstruction of Congress article.

The New York Congressman ran his 2018 campaign with the promise to impeach the President.

The Supreme Court has previously ruled that obstruction of Congress is disagreement between two branches of government – the legislature and presidency – and is something that is remedied by the courts. Political observers say impeachment is not the remedy and it sets up a dangerous precedent for future Presidents with whom Congress disagrees.

The other article is abuse of power with Nadler claiming Trump “solicited and pressured Ukraine to interfere in our 2020 election.”

“No one, not even the president, is above the law,” he said.

House Intelligence Chairman Adam Schiff (D-Calif.), who has been out of sight since last week’s questionable impeachment hearings, said that House Democrats couldn’t wait any longer and would bypass the courts which, if Congress followed the constitution, would be used to force the administration to comply with Congressional subpoenas.

The announcement came just two-and-a-half months after House Speaker Nancy Pelosi (D-Calif.) announced an impeachment inquiry against Trump. She said it was triggered by a complaint filed by an anonymous person that focused on Trump’s phone call in July with Ukranian President Volodymyr Zelensky. Trump and Zelensky have both denied the allegations.

Trump’s White House released a transcript of the call that same week and the ensuing investigation has been the fastest in history with Democrats allowing Republicans almost no witnesses and holding most proceedings from view of the public.

The move to impeach the President is unique in that, after three years and tens of millions spent on the Russian collusion investigation, no charges were brought on any of those allegations for which Democrats had previously said there was irrefutable evidence.

Democrats now say Trump abused the power of his office by reviewing Congressionally-approved aid for Ukraine – something that is not unusual for a president – including Bill Clinton. Trump has said he reviewed the aid because of widespread concerns about corruption in Ukraine and his administration noted it was ultimately sent out on time. Legislation passed by Congress in 1998 and signed into law by Democrat President Bill Clinton, gave the President of the United States the ability to specifically initiate investigations into Ukrainian corruption.

Democrats have sought to connect the two-month hold on aid with Trump’s request to Zelensky to “look into” allegations of corruption surrounding former Vice President Joe Biden and Biden’s son Hunter Biden, who worked for the Ukranian energy firm Burisma from 2014 to 2019.

Because Joe Biden is running for the Democratic presidential nomination, the party has claimed Trump’s request amounted to an attempt to interfere in the 2020 election.

Both American and Ukranian officials have said Ukraine wasn’t aware of the hold on the aid until August, weeks after the phone call took place.

Biden, speaking on camera in 2015, admitted he pressured Ukraine to fire the prosecutor who was leading the investigation into Burisma. Biden, who was Vice President at the time, also said he threatened to withhold hundreds of millions in aid until they did. Before he left Ukraine, he stated, they dropped the investigation.

Democrats have also accused Trump of “bribery” but at the last minute left that allegation out of the articles of impeachment.

Immediately after the press conference, Speaker Nancy Pelosi led the group out of the room ignoring questions from the media. Critics said they were running from their shameful act.

What happened to the tough “don’t mess with me” attitude with the press? Only #fakenews reporters would not be furious when they drop impeachment articles and yet don’t allow questions.

Trump has denied wrongdoing, asserting it is his duty to probe corruption. He has pointed to statements Joe Biden has made in the past, including bragging last year that while in office he threatened to withhold $1 billion in aid from Ukraine to get a prosecutor there ousted. That prosecutor, Viktor Shokin, was probing Hunter Biden’s employer, Burisma, at the time.

“Hardworking Americans know this sham is simply the dems weaponizing impeachment to try & undermine @realDonaldTrump, who has done nothing but fulfill the promises he ran on & fight for our country. Their behavior is shameful, but this will only serve to further unify our party,” White House press secretary Stephanie Grisham said on Tuesday morning.

To Impeach a President who has proven through results, including producing perhaps the strongest economy in our country’s history, to have one of the most successful presidencies ever, and most importantly, who has done NOTHING wrong, is sheer Political Madness! #2020Election

Added Trump, “To impeach a President who has proven through results, including producing perhaps the strongest economy in our country’s history, to have one of the most successful presidencies ever, and most importantly, who has done NOTHING wrong, is sheer Political Madness!”

A majority vote is required in the House to impeach Trump. Democrats currently hold a 233-197 majority.

If the House approves impeachment, a trial will be held in the Senate, where Republicans currently hold a 53-47 majority.

A vote to convict a president, or remove him from office, requires the concurrence of two-thirds of the Senators. No president in the history of the country has been impeached and removed from office. The last president to be impeached, President Bill Clinton, was acquitted by the Senate.