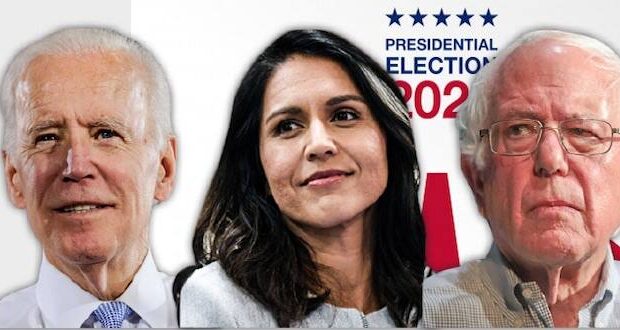 The Democratic National Committee (DNC) has again changed the qualifying criteria for primary debates, eliminating the last woman in the race. Rep. Tulsi Gabbard (D-Hawaii) will now be barred from appearing next to the two geriatric white men whose combined age is 155 years.

The DNC arbitrarily ruled Friday that participants in the next debate must have at least 20 percent of the pledged delegates. While Gabbard, 38, falls short , many thought she would be included to give the appearance of diversity and fairness.

Gabbard, who was accused by Hillary Clinton of being a Russian operative after she questioned key Democrat doctrine, is the only Democrat candidate left in the race besides the two men. She would have qualified for the debate under previous rules.

Gabbard took to Twitter Friday night after the new rules were announced, writing: “To keep me off the stage, the DNC again arbitrarily changed the debate qualifications. Previously they changed the qualifications in the OPPOSITE direction so Bloomberg could debate.”

The DNC previously removed one half of the qualifying criteria, enabling former New York City Mayor Michael Bloomberg, 78, to make his first debates.

Bloomberg and a slew of others dropped out of the race in recent days.

Gabbard appealed directly to Biden and Sanders, telling them: “I’m sure you would agree that our Democratic nominee should be a person who will stand up for what is right. So I ask that you have the courage to do that now in the face of the DNC’s effort to keep me from participating in the debates.”

DNC spokeswoman Xochitl Hinojosa said Tuesday that the thresholds to qualify for future debates would go up.

“By the time we have the March debate, almost 2,000 delegates will be allocated. The threshold will reflect where we are in the race, as it always has,” she said in a statement.

The previous criteria have centered around poll results and unique donors.

The DNC, rather than being moderators of the Democrat primary process, has been accused by its own members of unfairly changing the rules to attain the results the party wants rather than the choice of Democrat voters.