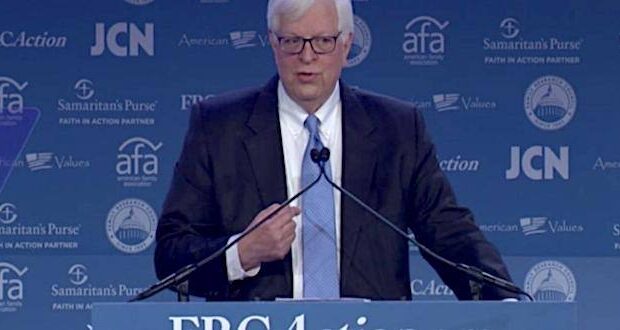 Current events are testing the seriousness of American Christians, talk-show host and columnist Dennis Prager wrote in a column on “The Daily Wire”.

“People look back in time and wonder how religious people, especially religious leaders — specifically, the clergy — could have failed in times of moral crisis,” said Prager, who founded PragerU with an aim to counterbalance what it says is liberal indoctrination in the nation’s universities. “The failure of most rabbis, priests and pastors to speak out today — when the risk to personal safety is so much less than it was in communist and fascist countries — should provide the answer: Religion doesn’t have all that much impact on most religious people. During comfortable times, it provides two essentials to a happy and fulfilled life — community and meaning — but when tested, it often fails like an umbrella that fails to expand just as it starts to rain.”

Much of the nation is being taken over by violent mobs he says speaking of those burning down inner-city communities, and destroying statues of the President who freed the slaves. “A central part of a major American city has been seized and occupied by people who hate America and its values, including its Judeo-Christian values,” Prager said. “Heard any clergy (aside from some evangelical Christians) speaking out against it?”

How should Christian leaders respond?

“The answer to this question also goes to the core of what it means to be religious. At the center of our two religions is the notion of fear of God: `Fear God, and keep his commandments, for this is the whole duty of man’,” Prager said. “But what is now apparent is that most Jews and Christians fear the left, fear `The New York Times’, fear being shunned by `friends’ on Facebook and mobbed on Twitter more than they fear God.

“That’s what this moment comes down to. Jews and Christians who fail this test will not only lose their freedom, lose the great American hope for mankind and lose the West; they will have also lost their souls.”

Previous: Secretary of State Mike Pompeo receives Friends of Zion Award
Next: Churches getting creative in holding VBS this summer