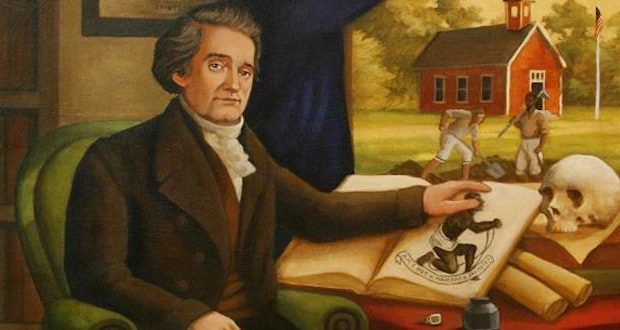 Noah Webster, School Master of the Nation and the Influence of His Faith.

When the Declaration of Independence was signed in 1776, Noah Webster was a few months shy of his eighteenth birthday. Although he was not a delegate to the Constitutional Convention of 1787, he is usually included among those colonists called Founding Fathers because of his active role in promoting ratification of the Constitution, often called “The Miracle of Philadelphia.” He also served as a soldier in the Revolutionary War.

In addition to his involvement in the campaign to secure ratification of the Constitution, he is most remembered for the important role he played in establishing the foundation of American education. Webster has been called “the Schoolmaster of the Nation,” a title he earned as the most active of the Founding Fathers in emphasizing the importance of public education.

Securing government funding for education was a major interest of Webster’s because he believed it was a responsibility of state and local governments to “discipline our youth in early life in sound maxims of moral, political, and religious duties.” Known and respected by his peers as “a brilliant scholar and dedicated Christian,” Webster was convinced of the need for public schools to teach moral principles.

Webster’s first contribution to the field of elementary education was his American Spelling Book, which included “an easy Standard of Pronunciation,” that first appeared in 1783. Commonly known as “the blue-backed speller”, it eventually became an all-time best seller with over seventy-million copies sold by 1947.

“Wherever the individual wished to challenge his own ignorance or quench his thirst for knowledge,” wrote author and historian Verna Hall, “there, along with the Holy Bible and Shakespeare, were Noah Webster’s slim and inexpensive Spellers, Grammars, Readers and his Elements of Useful Knowledge containing the history and geography of the United States. Webster’s books were unlike texts seen today, for they openly presented Biblical admonitions, as well as principles of American government. In one of his early editions of the “blue-backed speller” appeared a Moral Catechism – rules upon which to base moral conduct. Webster stated unequivocally, ‘God’s Word, contained in the Bible, has furnished all necessary rules to direct our conduct’.” 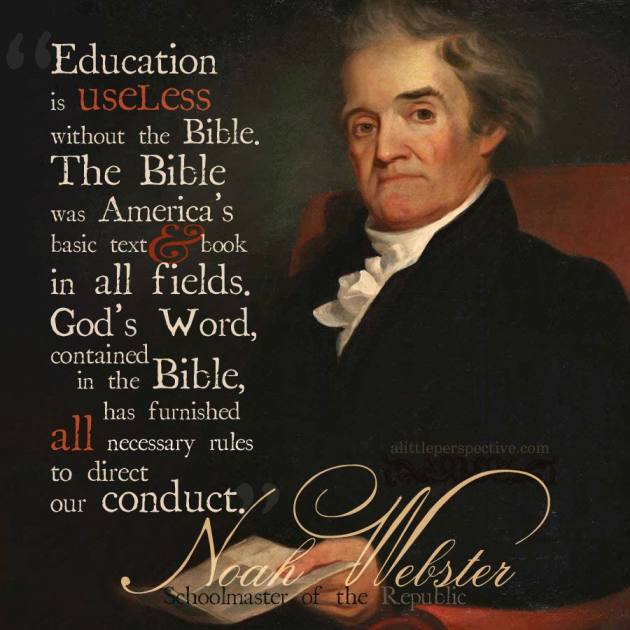 Webster’s definition for religion, for instance, was: “Includes a belief in the being and perfections of God, in the revelation of His will to man, in man’s obligation to

obey His commands, in a state of reward and punishment, and in man’s accountableness to God; and also true godliness or piety of life, with the practice of all moral duties.”

He defined marriage as “The act of uniting a man and woman for life; the legal union of a man and woman for life. Marriage is a contract both civil and religious, by which the parties engage to live together in mutual affection and fidelity, till death shall separate them. Marriage was instituted by God himself for the purpose of preventing the promiscuous intercourse of the sexes, for promoting domestic felicity, and for securing the maintenance and education of children.”

In his Rudiments of English Grammar, published in 1790, Webster drew lines of distinction between the American version of the English language and the established British version. Someone once said England and America were two countries separated by a common language. Webster was influential in the difficult task of codifying many of the differences that had evolved in the colonies in the way the language was spoken, words were spelled and pronounced, and in the rules of grammar.

In the preface of each of his books, Webster included comments explaining his belief that the Christian religion in general and the Bible in particular were the bedrocks

of American civilization and were the only safeguard against tyranny. This statement appearing in the preface of his Bible translation is typical of all his words of introduction:

“The Bible is the Chief moral cause of all that is good, and the best corrector of all that is evil, in human society; the best book for regulating the temporal concerns of men, and the only book that can serve as an infallible guide to future felicity…It is extremely important to our nation, in a political as well as religious view, that all possible authority and influence should be given to the scriptures, for these furnish the best principles of civil liberty, and the most effectual support of republican government. There are two powers only, sufficient to control men and secure the rights of individuals and a peaceable administration; these are the combined force of religion and law, and the force or fear of the bayonet.”

Like his fellow Founding Fathers, Noah Webster was a patriot. These stirring words of his need to be remembered today when patriotism is sometimes mocked: “Our fathers were men – they were heroes and patriots – they fought – they conquered – and they bequeathed to us a rich inheritance of liberty and empire which we have no right to surrender…Yes, my fellow freemen, we have a rich and growing empire – we have a lucrative commerce to protect – we have indefeasible rights – we have an excellent system of religion and of government – we have wives and children and sisters to defend; and God forbid that the soil of America should sustain the wretch who [lacks] the will or the spirit to defend them. Let us then rally round the independence and Constitution of our country, resolved to a man that we will never lose by folly, disunion, or cowardice what has been planned by wisdom and purchased with blood.”

–Bob Gingrich is a Kansas City author, historian on the founding of our nation and Metro Voice Contributor.