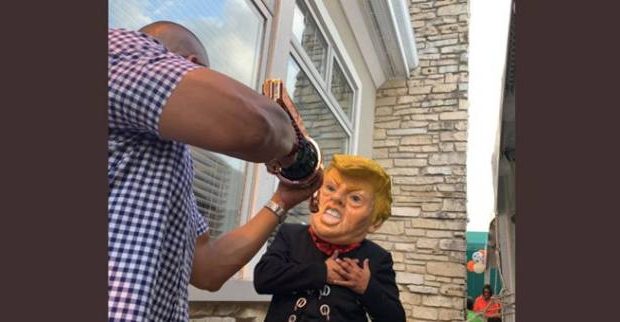 A Democrat Illinois State senator apologized after a mock assassination of President Donald Trump was held at one of his political fundraisers. Elected members of the Democrat party have been using increasingly violent language when talking about the President and Republicans in recent months.

Sen. Martin Sandoval’s Aug. 16 fundraiser showed pictures of at least one man pointing a fake gun at another person wearing a mask of the president.

As the man pointed the gun, the person dressed as Trump held two hands to their heart as if fatally wounded.

According to WCIA, which found the pictures on Facebook, a woman who attended the event posted them to the social media platform on Saturday and tagged Sandoval in them and the state senator was in several pictures posing with the man who held the fake gun.

“The incident that took place is unacceptable. I don’t condone violence toward the President or anyone else,” Sandoval said in an emailed statement sent to WCIA and Fox 32. “I apologize that something like this happened at my event.” He did not post the statement to his website or social media pages.

The Illinois Republican Party, the Illinois Democrat Party, and Democrat Illinois Gov. J. B. Pritzker also sent statements to the broadcaster but did not post them on their websites or social media pages.

“As our nation grapples with the epidemic of gun violence, purposely pointing a fake gun at anyone is insensitive and wrong. I condemn actions like the ones displayed in the pictures because they lack the civility our politics demands,” Pritzker stated.

Illinois Republican Party Chairman Tim Schneider said that Pritzker should fire the person holding the gun if they were part of his team. “Dangerous imagery like this will be condemned and seen as inappropriate by people of sound mind; however, a mentally unstable individual who wants to harm President Trump might find them as an inspiration,” he said.

White House counselor Kellyanne Conway shared the pictures and said: “Every Democrat should be asked if they support or disavow this.”

Other Twitter users tagged the U.S. Secret Service, urging them to get involved.

The fundraiser was held at the Klein Creek Golf Club. Some people paid thousands of dollars to attend.

The Cook County Republican Party called on Sandoval to resign.

“Democrats, especially here in Illinois, never miss an opportunity to castigate President Trump and republicans with over the top claims that they promote violence and are violent fascists,” the group said in a statement. “But, here we have a leading Democrat state senator actually making a decision to hold a mock assassination of the President for entertainment value and then photographing it for public viewing. The hypocrisy on display here by democrats stinks to high heaven.”