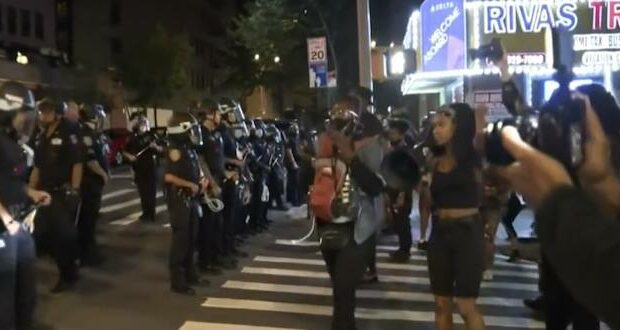 The poll finds that 70 percent of all Americans trust local police and law enforcement to promote justice and equal treatment for people of all races (up from 56%), and 52% feel the same about police unions (up from 40%) while trust in BLM has plummeted. That while the BLM organization, run by two self-described Marxists, raised a whopping $90 million in 2020.

Last June, 60 percent of respondents described Floyd’s death as murder, but that percentage now has dropped by double digits to just 36 percent. Uncertainty has grown about how to characterize the incident, caught on video, when Chauvin held his knee on Floyd’s neck and ignored his protests that he couldn’t breathe. Last year, 4 percent said they didn’t know how to describe it, but that number has climbed to 17 percent.

“There were eight minutes that the officer could have made a different decision, and he willfully held a man,” said Valda Pugh, a 67-year-old retiree from Louisville who is black. She was among those surveyed. “It was a murder. It was willful — maybe not premeditated. Nonetheless, the young man died.”

Kevin Hayworth, 66, of Garner, Iowa, who is white, disagreed. “I think it was a police officer doing his job,” he said in a follow-up phone interview. “It was just a tragedy, but I think he was within the limits of his duty of jurisdiction.”

There is no monolithic view in the black community, though most news reports have attempted to show unity ignoring millions of black doubters. One out of three black respondents do not believe George Floyd was murdered.

Two-thirds of white respondents also did not describe it as murder. White Americans are more likely to describe it instead as the police officer’s “negligence.”

Americans who have heard at least something about Chauvin’s trial say four-to-one, or 60 percent to 15 percent, that they hope Chauvin is convicted of something. That included 54 percent of white Americans and 76 percent of black Americans. The one-quarter of Blacks who hope Chauvin is is not convicted may show there was a media narrative at work that did not back up the truth on the ground, at least in the minds of these black respondents.

The drop in support for BLM, even among black Americans, is seen as a response to the rise in violence in the black community during the protests. Thousands of black-owned businesses were looted and burned from late May until the Nov. 3 election. Other polls found that while black Americans supported the slogan “Black Lives Matter,” they did not necessarily support the Marxist agenda outlined on the group’s website – including defunding of police departments.

As for “reforming” or defunding the police, the poll finds a slim majority supports reforming the police. Support for the movement to “defund the police” is slim. Furthermore, when forced to choose, more Americans wish to fully fund the budget for police in their community.

“Overall,” says Ipsos,  “51% of Americans support reforming the police, while 19% oppose. Though white and Black Americans aren’t too far apart on this (51% and 59% support, respectively), there is a sizeable gap between Democrats (73% support) and Republicans (33%).

Ipsos goes on to say report that though the concept of reforming the police is a net positive, “defund the police” is not. “Fewer than one in five (18%) support the movement to ‘defund the police.’ Across all demographic groups, support is highest among Democrats – but even they are primarily opposed (34% support, 39% oppose).

Support for abolishing, or eliminating funding for the police is even lower: 11% the report says.