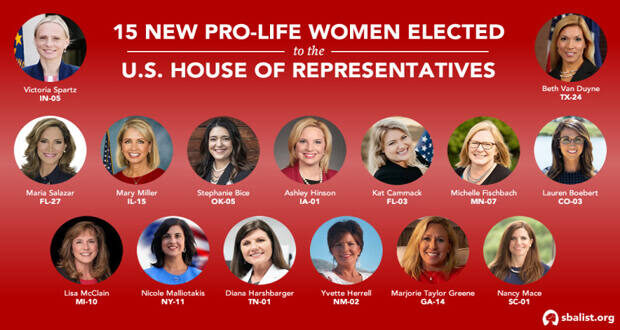 One underreported story from Election Day is that at least 15 new pro-life women will join the House of Representatives in January.

“We attribute their success to the fact that life is winning in America,” Prudence Robertson of the Susan B. Anthony List stated. “And regardless of the uncertainty in the presidential election, it’s clear to see that life is not a losing issue this year, especially because we see an unprecedented number of pro-life women being elected to Congress.”

Those newly elected representatives join 11 incumbent GOP pro-life women who won reelection “These gains are a repudiation of abortion extremism and further evidence that life is a winning issue in politics,” Marjorie Dannenfelser, president of Susan B. Anthony List, said in statement.

“And this is a diverse group of women who will no doubt stand up for the unborn,” Robertson said. “They come from various backgrounds. We have Maria Salazar, who was one of our endorsed candidates. She’s a Cuban-American woman, who understands the right to life. We have Yvette Herrell in New Mexico, who is newly elected,. She is the first woman from the Cherokee Nation to be elected to Congress for the Republican Party.”

In addition, least six pro-life women will be a part of the Senate, including re-elected incumbent Joni Ernst of Iowa.

“I’m going to share my favorite Psalm with you, and let it be a reminder of how we can get through this difficult time,” Ernst said during her acceptance speech. “And my favorite Psalm is Psalm 121, and it goes like this, ‘I lift up my eyes to the hills, and where does my help come from? My help comes from the LORD, the maker of heaven and earth.'”

A pro-life ballot initiative also who won last week. In Louisiana, voters passed a pro-life constitutional amendment saying there is no right to abortion or abortion funding under the state constitution. The ballot measure passed with 62.1 percent support from voters and was also supported by Louisiana State Senator Katrina Jackson, a vocally pro-life female Democrat.

Mat Staver, the founder, and chairman of the non-profit Christian legal ministry Liberty Counsel, spoke out about the elections, saying, “These pro-life women will bring new energy to Washington to preserve precious preborn children. This is another important step to making the womb a safe place again in America.”

Here is the full breakdown:

6 races featuring pro-life women yet to be called:

Young Kim (CA-39) — (Update: Kim has now been called the winner of this race)