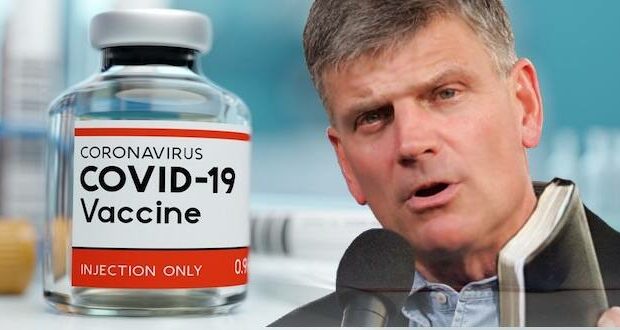 Franklin Graham says he has been vaccinated for COVID-19 and encourages others to do the same.

Graham made the comments to ABC News, which examined the divide within the Christian community over the vaccines. About half of white evangelicals say they will “definitely or probably” get the vaccine, according to Pew. That’s lower than Catholics (77 percent), black Protestants (64 percent) and atheists (90 percent).

“My father believed in modern medicine,” said Graham, the son of the late Billy Graham. “If anytime there was a vaccine or something that could help protect you, he was an advocate for it. He took it. I believe that it’s consistent with scripture — that we protect our lives and do whatever we can to save life. So I don’t have any problem with telling a person to take an aspirin or telling a person to have a vaccine.”

READ: COVID-19 rates hit 50% among migrnats according to Sheriffs Association

The nation’s COVID-19 infection continues to decline as states drop Covid restrictions and vaccines are distributed throughout the nation. More than 100 million doses have been administered, according to Bloomberg’s vaccine tracker. An average of 2.4 million Americans are vaccinated each day. Graham said he has been given the vaccine. While more receive the shot, the vaccination rates have actually dropped since a daily high of over 3 million under the Trump administration in January.

.@TerryMoran of @ABC News asked me my thoughts about the coronavirus #vaccine. pic.twitter.com/BfBPQIUDfc

“Thank God for the doctors and the researchers that have put this time and effort and money to develop these vaccines,” he said. “I hope that the American people will use them.”

Graham also criticized pastors who tell their congregation not to take the vaccine. ABC News spotlighted ministers who are opposed to the vaccine.

“I hope that the pastors in the pulpit would tell people how they can be saved from God’s judgment, and that’s through faith in Jesus Christ,” Graham said. “I think for a pastor to tell someone not to take the vaccine is problematic, because what would happen if that person died — got coronavirus and died – then is the pastor responsible? I would feel responsible.”

Graham made his Covid-19 comments as President Donald Trump this week encouraged his supporters to get the vaccine.