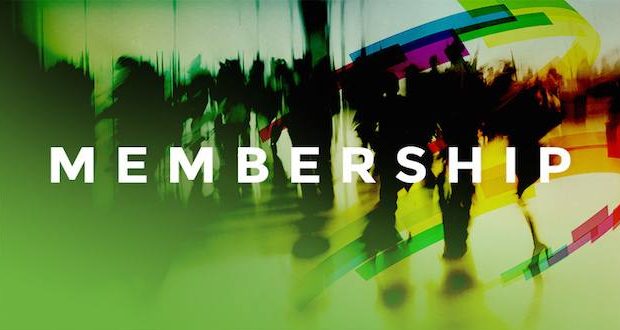 Results of a 20-year study by Gallup reveals a startling trend in church membership.

The percentage of U.S. adults who belong to a church or other religious institution has plunged by 20 percentage points over the past two decades, hitting a low of 50% last year, according to a new Gallup poll. Among major demographic groups, the biggest drops were recorded among Democrats and Hispanics.

Gallup said church membership was 70% in 1999 — and close to or higher than that figure for most of the 20th century. Since 1999, the figure has fallen steadily, while the percentage of U.S. adults with no religious affiliation has jumped from 8% to 19%. 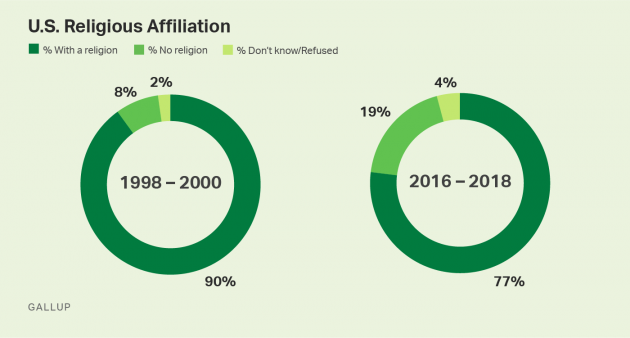 Among Americans identifying with a particular religion, there was a sharp drop in church membership among Catholics — dropping from 76% to 63% over the past two decades as the church was buffeted by clergy sex-abuse scandals. Membership among Protestants dropped from 73% to 67% percent over the same period.

Among Hispanic Americans, church membership dropped from 68% to 45% since 2000, a much bigger decline than for non-Hispanic white and black Americans.

There was a big discrepancy over that 20-year period in regard to political affiliation: Church membership among Democrats fell from 71% to 48%, compared to a more modest drop from 77% to 69% among Republicans.

It’s now apparent, say demographers, that one’s political party affiliations can be determined by church membership or lack of membership. 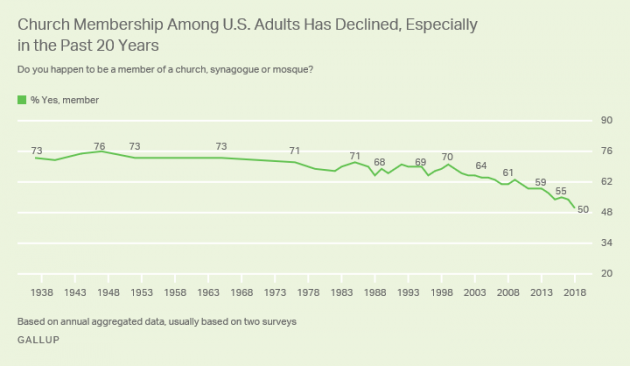 Mark Chaves, a professor of sociology, religion and divinity at Duke University, said that as recently as the 1970s, it was difficult to predict someone’s political party by the regularity with which they went to church.

“Now it’s one of the best predictors,” he said. “The correlation between religiosity and being Republican has increased over the years.”

The overall decline in church membership is driven by cultural and generational factors, said Nancy Ammerman, a professor of the sociology of religion at Boston University.

“Culturally, we are seeing significant erosion in the trust people have for institutions in general and churches in particular,” she said. “We are also seeing a generational shift as the ‘joiner’ older generation dies off and a generation of non-joiners comes on the scene.”

The new Gallup findings underscore that generational dynamic. Among Americans 65 and older, church membership in 2016-2018 averaged 64% percent, compared to 41% among those aged 18-29.

Changes in Church Membership by Generation, Over Time

“The challenge is clear for churches, which depend on loyal and active members to keep them open and thriving,” wrote Gallup poll analyst Jeffrey Jones. “How do they find ways to convince some of the unaffiliated religious adults in society to make a commitment to a particular house of worship of their chosen faith?”

“These trends are not just numbers, but play out in the reality that thousands of U.S. churches are closing each year,” Jones added. “Religious Americans in the future will likely be faced with fewer options for places of worship, and likely less convenient ones, which could accelerate the decline in membership even more.”

Professor Scott Thumma, who teaches sociology of religion at Hartford Seminary, suggested several likely factors behind the decline. Among them, he said religious young adults are delaying marriage, postponing having children, and, when they do, having fewer children.

He also suggested there was diminished social pressure to formally join organizations.

“I’ve encountered many persons in churches that have attended for several years but did not officially join or become a member,” he said by email. “This is also evident in persons switching from one congregation to another without joining any.” 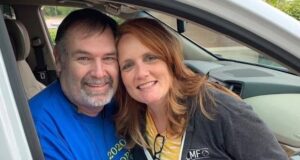