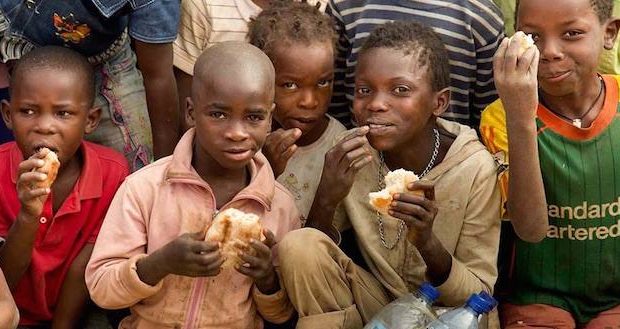 Poverty rates around the world are falling dramatically, especially in the last few years but there’s still much work to be done.

While the United States experiences record growth, global economic prospects remain sluggish. The total count of people in poverty declined by more than 68 million people between 2013 and 2015—”a number roughly equivalent to the population of Thailand or the United Kingdom.”

Two decades ago, 60 percent of the global population lived in low-income countries, by 2015, that had fallen to just nine percent.

Though they won’t be released for several years, numbers from 2016 to present should be even stronger with the resurgence of the American economy and its affect in boosting poorer nations.

But despite that progress in reducing extrme conditions, nearly half the world’s population still lives on less than $5.50 a day the World Bank repported recently.

Much of the world remains at or below the $5.50-a-day threshold. In that range, global poverty fell to 46 percent from 67 percent between 1990 and 2015. The bank reported last month that extreme poverty had fallen to 10 percent in 2015. 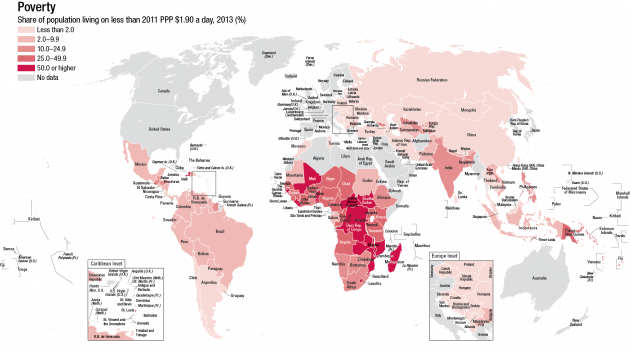 WHERE THE WORLD’S POOR LIVE

With China’s rise, East Asia and the Pacific saw an amazing 60 point drop in the poverty rate to 35 percent, but the region is unlikely to continue to achieve that pace going forward as growth has moderated in China.

In addition to China, the drop in poverty from the 1980s to present was driven India. The statistics for China are especially mind-blowing: In 1981, a staggering 88 percent of Chinese were extremely poor, but by 2013 that figure had dropped, incredibly, to just 2 percent. India’s figures, though not as drastic, are still impressive: In about the same period of time, the poor population declined from 54 to 21 percent.

Sub-Saharan Africa, by comparison, had a 54 percent poor population in 1990, down to 41 percent in 2013. Not only is the decline much smaller than China or India’s, but due to massive population growth in Africa, the absolute number of poor people actually rose by 113 million.

In a twice-yearly report, the bank took a broader look at poverty to see where countries were lagging, even though the share of those living in extreme poverty—defined as earning less than $1.90 a day—has continued to come down in recent years.

Under the expanded criteria for poverty, the report found the number of poor worldwide was still “unacceptably high,” while the fruits of economic growth were “shared unevenly across regions and countries.” This was especially evident when you compare Africa and Asia or South America.

“Particularly distressing findings are that extreme poverty is becoming entrenched in a handful of countries and that the pace of poverty reduction will soon decelerate significantly,” the report said.

Africa remains the poorest continent on earth. Poverty is becoming entrenched in Sub-Saharan Africa, where 84.5 percent of the population continue to live on less than $5.50 a day, the report said.

Despite the improvement, the report said current trends indicated the World Bank’s goal of reducing extreme poverty to less than three percent of the world’s population by 2030 may be unattainable.

President Trump has come under scrutiny for his statements on world poverty and the best way to reduce it but economic growth in the United States is evidence that it is working.

While United States has a third of the population of China, it still has the largest economy in the world, and at $20 trillion compared to second-place China’s $14 trillion and third place Japan’s $5.1 trillion, it’s really not even close. To put things in perspective, Canada comes in at number 10 with only a tenth of what the United States puts out ($1.8 trillion).

In a TownHall column, economist Scott Morefield contends the United States is fueling much of the reduction in poverty since 1990.

“In general, as the U.S. economy goes, so goes the world. If we are roaring along, the world roars along with us. If we tank, they tank too, and the lives of lots of poor folks get exponentially worse,” says Morefield. “So when President Trump releases U.S. manufacturers from burdensome regulations, cuts corporate tax rates, and implements business-friendly policies that has in no small part led to some of the greatest economic gains in any two year span in American history, the world benefits as well.”

The economist listed those policies as one of “Five Ways America is Saving the World.” Time will tell when the next report is released in two years if reductions in poverty continued and hopefully expanded under the current U.S. economic expansion.

And in America, much of that growth is then translated into initiatives by the non-profit sector which fuel private initiatives in train women to start their own businesses. In much of Africa, women remain the primary bread-winners in families because of war and the AIDS epidemic taking the lives of millions of men. If women can be given opportunities for micro-businesses, their communities benefit.

In addition, education and life-saving technology like fresh water delivery systems that free million of women from hours of hauling water each day, are needed to bring the world’s poorest areas in line with World Bank goals.